Some interesting reports are hitting the wires regarding another impressive top-tier handset from the folks at Samsung. Interestingly enough, we’re having a little deja-vu as the same model number (GT-B9150) leaked last year as the rumored Samsung Galaxy Q slider. Today however it seems to have received an upgrade to the new Samsung Exynos 5 dual-core processor and more. Lets take a peek shall we?

Reports from PocketNow have surfaced stating this device is in the wild again, and being testing and spotted in a few benchmark results. What was intriguing was not only the model number, but also the processor, screen resolution, and Android version this device seems to be packing. Looks like a high-end powerhouse smartphone could be in the works — just like the Galaxy S IV.

Based on the GLBenchmark results the GT-B9150 is running on Android 4.2.1 Jelly Bean, is powered by Samsung’s popular 1.7 GHz dual-core Exynos 5 (Cortex-A15) processor, and is rocking some sort of 1920 x 1080p full HD display. Previous reports suggested this was a slider, and we’ve heard crazy reports about an Android powered folding device like the Nintendo 3D. While that second one is doubtful, this could be their new flagship slider. 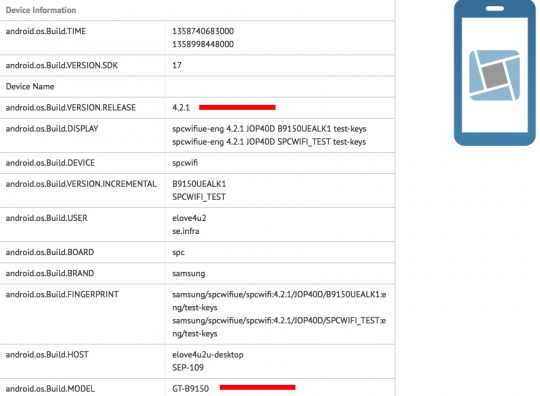 For now we don’t have any details aside from the few random leaks in benchmark results, so we’re in the dark here. It’s worth noting that last years leak showed a 720p display so whatever this device is, it’s still in development and is getting improvements along the way. This could be a tablet, possibly their Galaxy Tab 10, or some high-end smartphone. We’ll report back when we see or hear any further details.