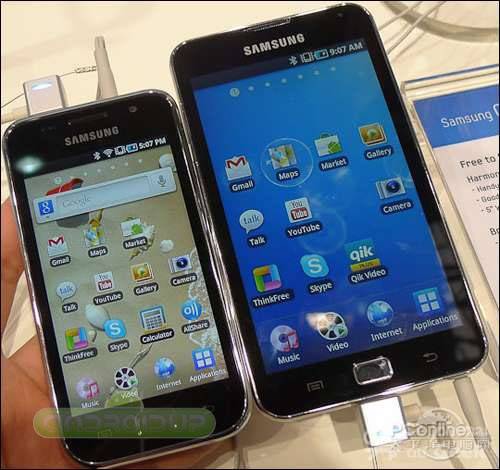 Here is a photo that will most likely get those rumor mills stirring again. We aren’t sure exactly what we are looking at, or how big the screen is but comparing it to the 4.0″ display on the Galaxy S next to it, I’d say it’s pretty large. Sources are claiming this to be the new Samsung GT-I9220 that we recently saw on a leaked Samsung roadmap. While the leak is claiming it to possibly be a 5.29″ AMOLED display with a 1280x720p resolution the leaked roadmap suggests something much smaller for the GT-I9220.

Update: After a few tips and a closer look this is nothing more than the 5″ Samsung Galaxy S Player. As in not a phone, only Samsung’s recently seen music player to compete with the iPod. Sorry guys!

Details are still a bit blurry but they are stating this Samsung beast will indeed have a high resolution Super AMOLED display with a 1280x720p resolution. Rocking a blazing fast 1.4 Ghz dual-core processor and more. While this device could in fact have a huge 5.3″ display the leaked roadmap suggests the GT-I9220 would have only a 4.3″ screen but the image shown above clearly shows something larger than that.

Could this be the GT-I9250 that we also heard about. The roadmap suggested that device would have a 4.65″ AMOLED display and that would line up a bit better with the size of the screen shown in the leaked image. Our sources at AndroidUP claim this might be called the Samsung Galaxy S II Plus at launch and we might see it sometime around October 24th. Either way the photo sure is exciting, we don’t have a lot of details but would love to get some hands-on time with the phone.