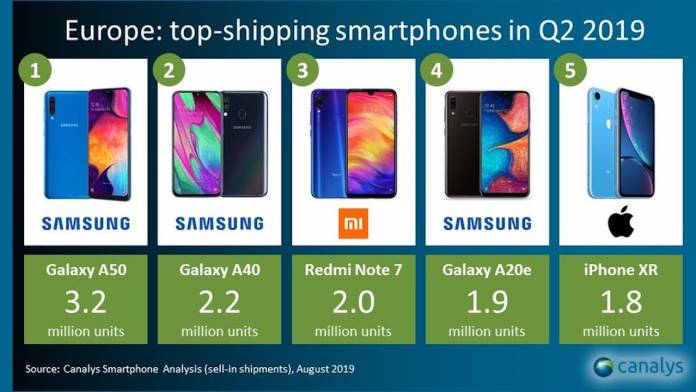 Huawei’s continued loss is now Samsung’s gain. Well, at least when it comes to the European markets. As the former continues to face issues resulting from the “political restrictions” placed by the U.S, the latter has solidified its position as the top smartphone brand in Europe for the second quarter of 2019. They now have 40% of the market cornered, which is their highest number in five years. Meanwhile, Xiaomi is also taking advantage as they now have 9.6% of the market, making them the 4th biggest smartphone brand in the region.

If you think that it’s Samsung’s flagship devices that are giving them life in Europe, you’re slightly mistaken. According to the report from Canalys, it’s actually their Galaxy A series, specifically the Galaxy A10, A20e, A40, and A50 that has brought them to the top spot and accounts for 12 million of the 18.3 million smartphones that they shipped for the second quarter of this year. According to Senior Analyst Ben Stanton, Samsung is now back to winning back market share and not just focusing on operating profit.

But it’s not purely their products that are giving Samsung their best numbers in Europe. The continued woes of Huawei, who the U.S government has been blackballing because of suspected strong ties to the Chinese government, has continued to lose ground, with their shipments falling to just 8.5 million units, a 16% fall from the same period last year. Samsung is apparently positioning itself as “a stable alternative” to both retailers and operators.

Xiaomi is also making a move up the ladder as they are now 4th in terms of smartphones shipped in Europe for Q2 with 4.3 million devices. In terms of annual growth, they are actually top with 48% as compared to the still significant 20% of Samsung. They are actually the only two brands in the top 5 (Apple is 3rd and HMD Global is 5th) that showed positive growth compared to the same time period last year.

Canalys analyst Mo Jia says that Xiaomi’s core strength is that it is appealing to price-sensitive countries in the European market and so it can now be considered a “major force”. Samsung meanwhile needs to just consolidate its power against the troubled Huawei brand so they can “negotiate harder on the margin.”