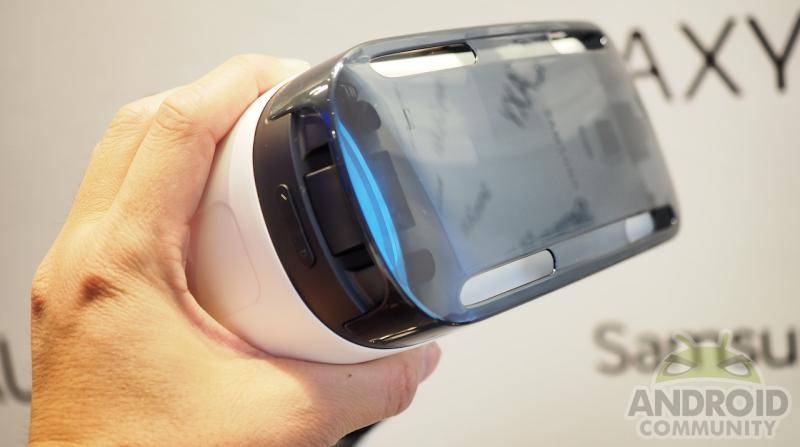 Virtual Reality or VR is pretty much a gaming thing so it was quite surprising to learn that Samsung has decided to get its feet wet with the technology. And yet here is the Gear VR, the first fruit of the collaboration between Samsung and Oculus, and we take it for a spin to see just what Samsung has to offer for this rather young market.

All things considering, the Gear VR is practically one big and probably expensive smartphone accessory. One that is built for one and only one smartphone: the Galaxy Note 4. That really isn’t surprising since the two are being launched at the same time. The Gear VR takes advantage of the display and processing power of the Galaxy Note 4. That means a 5.7-inch QHD screen and, depending on what’s available, a 2.7 GHz quad-core Qualcomm Snapdragon 805 or a 1.9 GHz octa-core Samsung Exynos 5433 CPU. The Galaxy Note 4 practically drives the whole shebang, with the the Gear VR providing the shell and the controls.

The headset itself has buttons for volume control and the Android back function as well as a touchpad for navigation and other interaction points, like, say, blasting a baddie to oblivion. Yes, the Gear VR is still a gamer’s toy and the demo app for the headset makes that plain and obvious. Half of the Galaxy Note 4’s display is dedicated to each eye, just as with any VR contraption you might have seen or read about. Once set up, the power and brilliance of the Galaxy Note 4 shines through. The experience was totally immersive, performance was responsive, and there wasn’t any lag with head movements. The Gear VR has its own set of motion sensors to keep your head and the video output in sync, as well as a proximity sensor to tell if you’re wearing the headset or not.

Of course, that was just with the rudimentary demo app, a very basic game. The real challenge, and currently the Gear VR’s limitation will be in future content. As a 3D virtual reality headset, you will need content specifically designed for that use case. Although you can also run apps as you would or even watch videos normally, you won’t get the “magic” of stereoscopic 3D. All you’ll get is the benefit of hands-free viewing. At the moment, there is virtually, no pun intended, no other content available that takes advantage of the Gear VR’s features. But that shouldn’t remain true for long. Details are still murky at this point, but Samsung is tasked to bring games, apps, and videos that will utilize the 3D effects and 360-degree capabilities of the device.

There are, however, some minor usability issues, not because of the Gear VR itself but because of the very nature of the device. For example, those wearing glasses will have to shed off theirs in order to wear the headset, which potentially means they will have a less than favorable experience using it. The headset also doesn’t pipe out audio on its own. You will have to either plug in wired earphones into the Galaxy Note 4 itself or use a bluetooth headset, which might be more comfortable. You can opt to forego both, of course, but the placement of speakers on the smartphone makes it less than ideal.

The Samsung Gear 4 is slated to start shipping in October. Whether Samsung will be able to come up with compelling content, or convince a host of developers to do so, will be the first litmus test for this interesting yet quite eccentric Galaxy Note 4 companion.