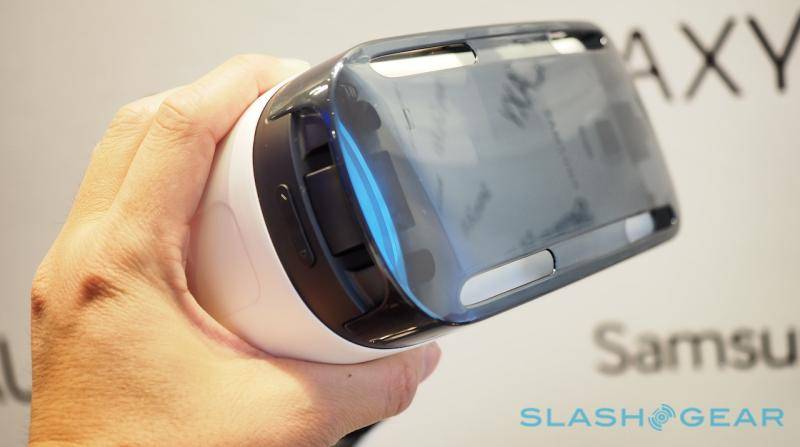 It’s a virtual reality day for Samsung. The Korean OEM has just unloaded a bunch of announcements and details surrounding its foray into a niche gaming market with the Gear VR headset. Interested app developers and content creators will be able to get their hands on the Innovator Edition of the device early December and for only $199 at the lowest. A surprise reveal was an odd, sci-fi looking camera that will actually let you record video for use with the Gear VR headset.

This camera, called “Project Beyond”, is shaped more like a gear than a traditional camera. Each of those groves houses two Full HD cameras, plus one on top, giving it a total of 17 eyes to see the world in complete a 360-degree 3D view. It is able to process 25 GB of data per second, stitching together the images into a complete spherical view for the VR headset. But more than just recording, it is actually also capable of livestreaming its input to other Gear VR users as well.

But a VR headset is only as good as the number and quality of content available for it. That is why Oculus is announcing the Oculus Mobile SDK that was designed specifically with the Gear VR in mind. Aside from providing the tools for making apps for the Gear VR, the SDK also includes open source demos of VR apps to help kickstart developers’ creative juices. These include the Oculus Cinema movie player, Oculus 360 Photos, and Oculus 360 Videos. Not included in the open source examples is Oculus Home, which becomes the landing screen when the Galaxy Note 4 is plugged into the headset. And of course there’s also Oculus Store for finding more content. All these apps, in theory, will be downloaded the first time you setup the Galaxy Note 4 with the Gear VR.

As for content, there are already a few who have signed up for Samsung’s VR experience. Some of those have already been known, like the Temple Run VR incarnation of the popular endless runner game. Others include Harmonix Music VR that adds a 3D visual touch to your listening experience, the Protocol Zero game from DeNA that turns the headset into “X-ray goggles”, a 360-degree Cirque du Soleil show, and Marvel’s 3D recreation of Tony Stark’s lab from the upcoming Age of Ultron film.

Now that you’ve got your appetites whet, let’s talk about price. The Samsung Gear VR headset itself will come with a $199 price tag. But if you can spend $249, you will also be able to grab a Bluetooth controller along with it. That said, the Gear VR is useless unless you already own a Galaxy Note 4, which will cost you an additional $300 or $750, with or without contracts, respectively.