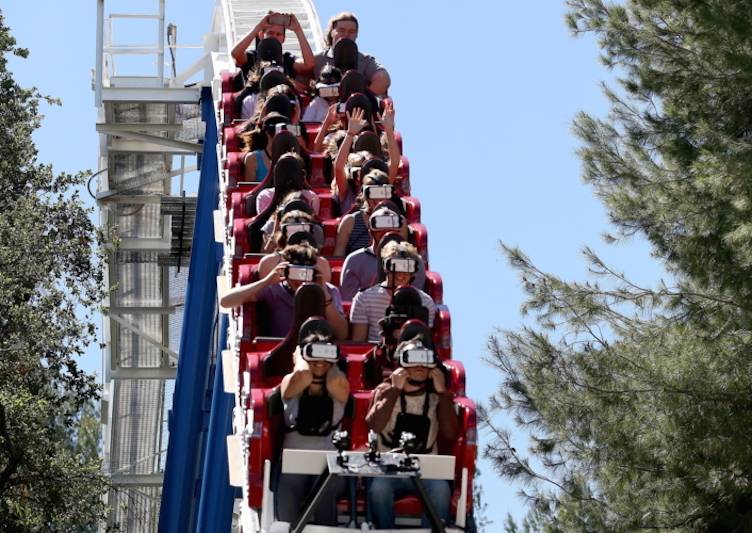 Samsung is giving you another reason to visit Six Flags Magic Mountain this Spring. The tech giant partnered with the theme park management to bring the Gear VR and launch a new roller coaster ride called known as ‘The New Revolution Virtual Reality Coaster’. It’s nothing to be afraid of because it’s just virtual reality–really.

The new Virtual Reality Coaster was launched over the weekend especially for Six Flags Magic Mountain’s Season Pass Holders. The soft launch had the brave ones ride the roller coaster wearing Gear VRs that were playing a virtual reality video of a futuristic battlefield in a planet that’s being threatened by alien invasion.

As if if riding the roller coaster isn’t already scary, this ride will have you co-pilot a fighter jet that takes off from the edge of a building. The aircraft flies through the city as you go up, down, twist, and along the track, the Gear VR treats you to an exciting “show”–a first of its kind virtual reality experience.

The New Revolution Virtual Reality Coaster’s speed is 55mph and features the first giant loop in the world that’s 45-feet in diameter and 90-feet high. It’s located in the Six Flags Plaza with all 3,457 feet of twisted steel track where you would be “racing” and “saving the planet”.

Six Flags Magic Mountain’s The New Revolution will be open to the public starting April 21. So…who wants to try this virtual reality ride?