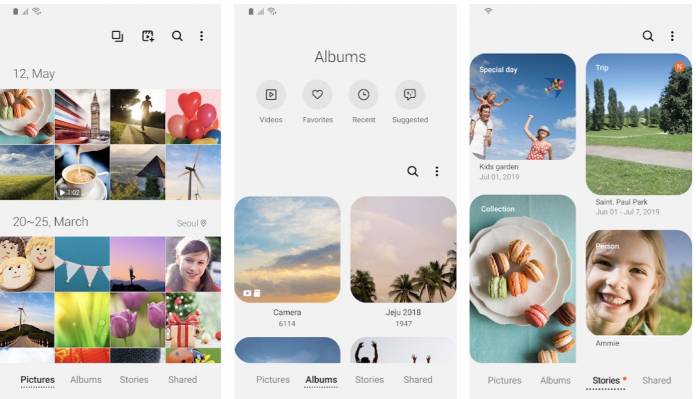 The Samsung Gallery app is something that you probably use a lot, but more for viewing the photos and videos that are stored on your device. You also don’t expect a lot of updates from Samsung for this app but every once in a while they do bring something new even if it’s just a minor change or future. The latest update to the Gallery app brings something for both phones and tablets, bringing a new interface from the Drawer UI for the tablet app and full-screen scrolling for the phone app.

SAM Mobile shares the new features that phone and tablet users will get when they update their Gallery app. For tablet users, you’ll now get a new user interface called Drawer UI. What it does is hide additional options to the side so it looks more like the traditional Android-style. These are things like Suggestions, Locations, and Trash. Just tap on the hamburger button or swipe from the left edge of the screen so you can access these things if needed. It works for both the standard and DeX mode.

The other new feature in the update is full-screen scrolling. When you enable it, it will hide the status bar and navigation buttons so you can scroll unencumbered through your photos and videos. It is turned off by default and you will have to go to the Gallery app’s settings in order to turn it on. This will only apply for smartphones though and while it may not be something that everyone needs, at least it’s there if you want to do some scrolling through your media.

The update also includes “a tip card to guide users when downloading Samsung Cloud contents”. This is probably for those who have just gotten a new phone or tablet and would like to migrate their photos and videos to the Gallery app of their new device. Aside from these though, there are not any other new things to expect from this update. But if you use the Gallery app a lot when viewing your media, then this should be useful enough.

You can update your Samsung Gallery app to version 12.1.07.5 through the Google Play Store or the Galaxy Store. If the update isn’t there yet, you probably have to wait a few days for it to roll out for everyone.