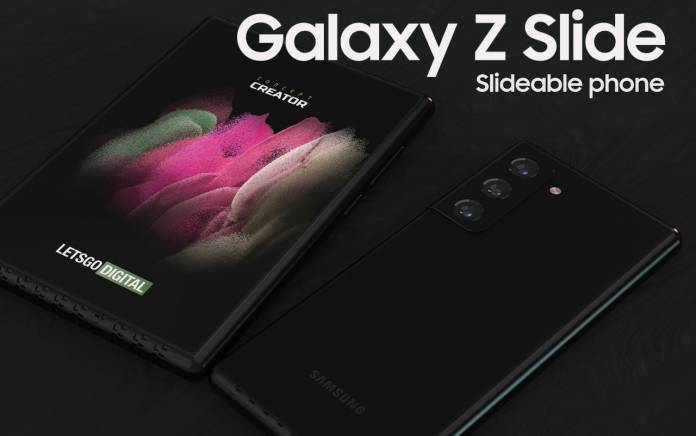 Last week, the Samsung Galaxy Z Roll trademark filing was spotted on EUIPO. Over the weekend, it’s the Samsung Galaxy Z Slide’s turn to be spotted. The name of the concept slideable smartphone has reached the same database which means the South Korean tech giant is planning on a lot of new devices. It doesn’t really mean they will reach production but it’s always nice to learn more about what the OEM is up to. We know it’s been preparing to roll out the Galaxy Z Fold 3 and the Galaxy Z Flip 3. It may also introduce a multi-fold device early next year.

As for the Galaxy Z Slide, this could also be the Galaxy Z Roll. It appears to refer to almost the same phone with a retractable display described before. The EUIPO filing though has revealed some new information.

The Galaxy Z Slide and the Galaxy Z Roll are basically the same. Both are categorized under Class 9. What’s more interesting is that the Samsung Galaxy Z Slide has some mention of the S Pen. It could mean the unconventional phone will be able to support S Pen just like the Galaxy S21 Ultra .

The Galaxy Z in the name means the smartphone will have a foldable-flexible display. So will the Samsung Galaxy Z Roll and the Galaxy Z Slide slidable phone be two different products? That’s more likely to happen.

A summer 2021 arrival may not happen but at least we can probably expect at teaser to what’s next from the Samsung Galaxy Z line for 2022. Let’s wait and see.