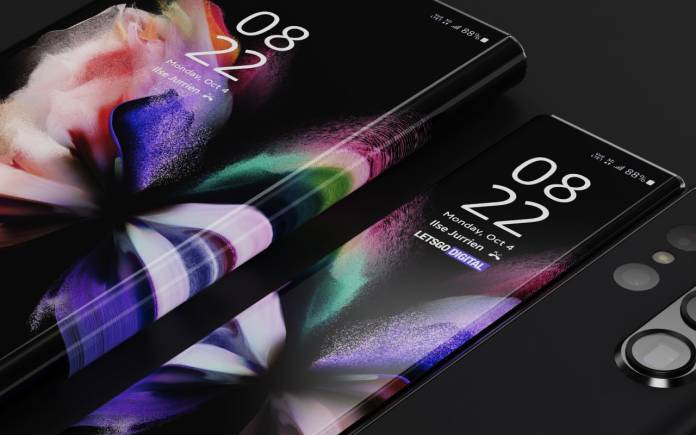 Don’t take this report seriously just yet. Many people are simply exploring the possibilities and presenting conceptual images of future Galaxy Z phones. The latest images from LetsGoDigital are of different iterations of the Galaxy Z series. It’s not clear yet if Samsung will discontinue the Galaxy Note line but we’re certain the South Korean tech giant will continue to come up with new foldable phones. The foldable device category has just started and Samsung is at the forefront.

The Galaxy Z Fold concept here looks ambitious. Anyone is free to dream but we like the idea of a phone with a foldable external display wrapping around the hinge. We have probably imagined something similar before but this one comes with an S-Pen slot.

This Samsung Galaxy Z Fold Note comes with a single foldable exterior display. Unfold the phone and you get a bigger display. The phone turns into a tablet with a bigger screen.

The S-Pen slot appears to be on the rear which isn’t exactly accessible especially when the Note is folded. You need to unfold the device to access it which seems to be not practical.

The foldable screen isn’t folded inward. The outward folding screen can be easily damaged since it is “thinner” than usual phone displays. The wrap-around phone can be thinner and lighter especially since no two housings are used. This could also mean lower price.

The S-Pen slot isn’t like what we have seen in the Galaxy Note phones before. There are simply cutouts on the rear of the wrap-around display. The stylus can then be placed in between with magnets. The result is the S-Pen won’t easily fall out.