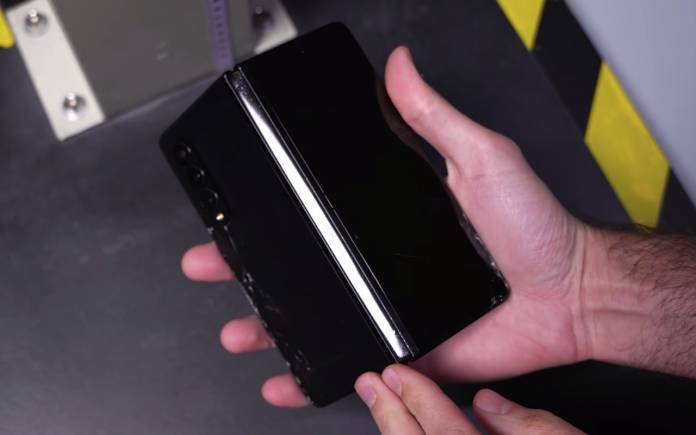 Between the two new foldable phones, the Galaxy Z Fold 3 is more advanced than the Galaxy Z Flip 3. It’s already the third-gen foldable smartphone from Samsung. It comes with a lower price tag plus an under display camera technology that won’t be available on the Galaxy S22. The phone also comes with S-Pen support so this can be a worthy replacement of the Galaxy Note. PhoneBuff has received the smartphone to test and find out haw fragile the phone is.

PhoneBuff’s Drop Test has become a standard. The Samsung Galaxy Z Fold 3 is said to be more durable than ever that this test can show us.

The foldable phone has gone through a series of drop tests. The phone actually survived but not without any scratches. It was tested both open and closed.The Armor Aluminum frame is generally strong but there is now a shattered glass even with the Gorilla Glass Victus protection.

When folded or closed, the Galaxy Z Fold 3 was dropped like any regular smartphone. When the foldable screen is exposed and then dropped, it still survived, thanks to a PET protective layer.

Of course, it is still advisable that you install a screen protector. The phone is still expensive (although “more affordable” compared to the previous model) so it is advisable you use as much protection. A phone cover plus a screen cover will be good enough.