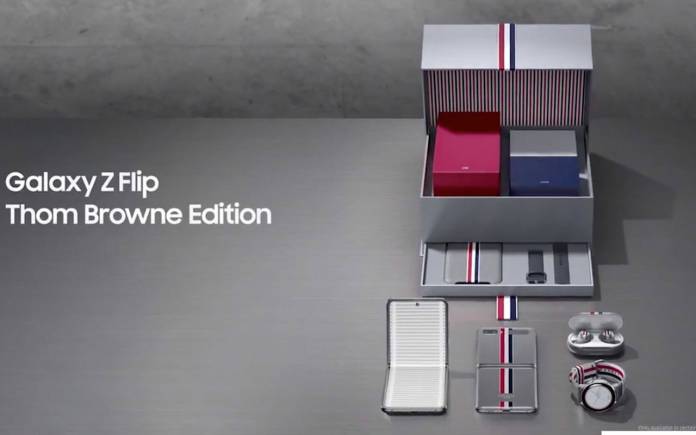 Who is Thom Browne? We are pretty sure that is the first question on your mind upon seeing the headline. The Samsung Galaxy Z Flip hasn’t been out officially but we’ve been seeing a number of live images and videos. In a little while, the world will get to see the Samsung Galaxy S20 phones. They may be joined by the new Galaxy Z Flip but we won’t be surprised if the foldable phone won’t be revealed just yet. After the hands-on videos that surfaced on YouTube and being promoted during the Oscars 2020, here is another Galaxy Z related news item.

This is more of a stylish version. The specs and features are the same. Only the design is slightly different–fashioned after Thom Browne’s brand of style. The name Thom Browne is now a fashion brand where Thom Browne is still the Chief Creative Officer. Ironically, he only owns 15% of the brand–the rest is owned by Ermenegildo Zegna, an Italian luxury fashion house.

This Samsung Galaxy Z Flip Thom Browne Edition pack includes the phone and some accessories. There may be some software features and hardware different from the regular Galaxy Z Flip but there are only exclusive to the special edition.

We see a Galaxy Watch Active 2 and Samsung Galaxy Buds+ with Thom Browne design. We’re assuming this special version will be slightly more expensive than the regular model. We doubt though if it can reach $2,000 so we’re still on that $1,500 estimate.

The Samsung Galaxy Z Flip Thom Browne Edition was actually posted on the brand’s Instagram account last month. It was only a teaser but we’re getting closer to the real thing now–maybe in a few hours or a few days.