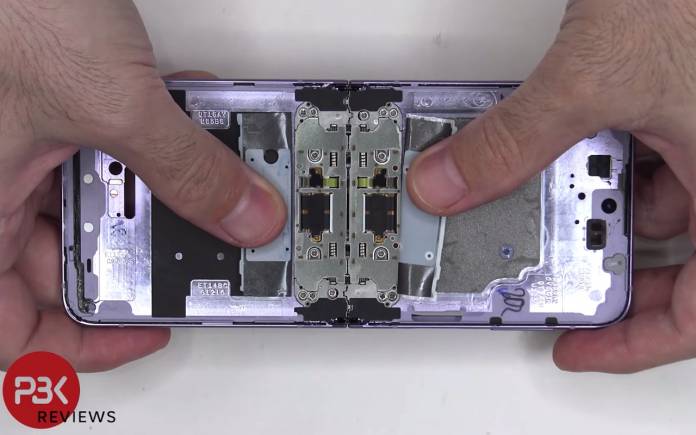 That was fast. A Samsung Galaxy Z Flip 3 Teardown video has just been published and so now we have a glimpse of how the South Korean tech giant worked on the new clamshell foldable Android smartphone. We can’t say this is as durable as the Samsung Galaxy Z Fold 3 but then again the phone has yet to be tested too in real world conditions. What can be done right now is open the phones first like what PBKReviews did.

With the foldable display, it means the phone may be less durable. Samsung has been saying more about how it improved the Galaxy Z Fold 3 but not much on the Flip Z.

Opening the phone reveals its repairability. It’s easier to open because it is smaller but not that smooth because the rear is made of glass. You need to be very careful especially since a display cable is found under one of the panels.

Be careful when you remove any part because there are cables underneath. Don’t just pull apart a component because you’ll never know what you’re already taking out. If you plan on removing the battery, note that it’s glued down.

There are two batteries actually and both of them may be taken out by using some alcohol on the glue. There are adhesives all over to hold the foldable display, backplates, and even the camera lenses.

So what’s mainly inside? Lots of graphite pads and graphene covers. This could mean the Samsung Galaxy Z Flip 3 won’t heat as much.