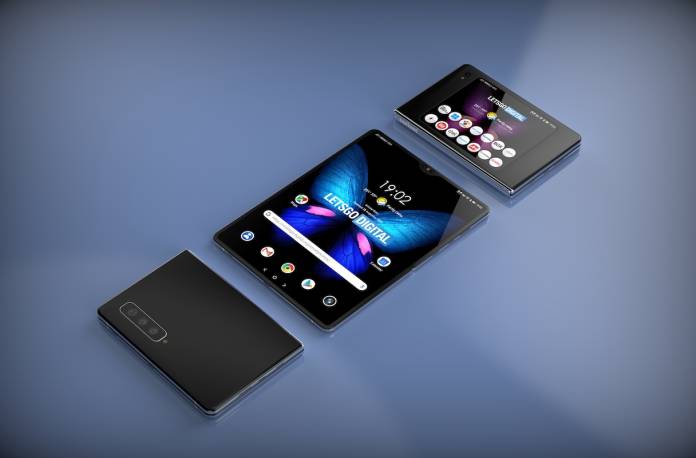 The name doesn’t really matter at this point because Samsung can still make changes from today and until the official Unpacked event. What we’re more concerned about is the design. A recent patent tells us a new variant of the Galaxy Z Fold may come with a horizontal hinge.

The device is said to come with a large flexible screen. With the horizontal hinge, this may mean you will have to hold the phone-tablet in a different position.

A new foldable phone form factor may be considered. It could be different from the Galaxy Z Fold 3 and the Galaxy Z Flip 3. A rollable phone has surfaced before as an interesting concept but that may be a challenge to implement.

The South Korean tech company is actually filing for several patents for various foldable phones. They are just patents but we find it interesting to imagine how a design will come to life. This Galaxy Z Fold with a horizontal hinge is only one.

The new patent shows a flexible display with no notch. We’re guessing an Under Panel Camera may be used but then again there is actually a double punch-hole camera. The World Intellectual Property Office (WIPO) listing includes six sketches of a product in either folded or unfolded form.

It may remind you of a previous Galaxy Fold but the hinge is different. The horizontal format makes it somehow a larger Galaxy Z Flip. Could this be a Galaxy Z Fold Lite then? That is just one possibility.

This year’s Galaxy Z models are proving to be successful. We’re crossing our fingers the next Galaxy Z Fold devices will even be better, more powerful, more functional, and more affordable, and more durable.