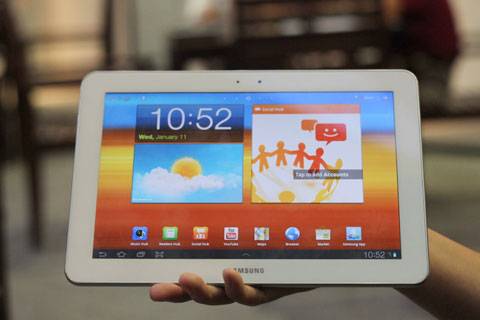 We’ve been seeing a huge shift in Android lately with carriers offering white versions of smartphones. Mainly from Samsung with their all popular and famous Galaxy S II line and recently the Galaxy Nexus. Today we have a few images of the Samsung Galaxy Tablet both the 7″ and 10″ model sporting the color white.

Unlike the recently leaked white Galaxy Nexus the tablets are completely white — that includes the front bezel. Looking at the photos they actually look pretty decent and I wouldn’t mind owning one myself. Hopefully Apple doesn’t come after them for the color — but I don’t think you can patent a color (jokes) although that top picture does remind me of an iPad.

Originally the Samsung Galaxy Tab 10.1″ was launched with both white and black versions but this was only the part on the rear of the device. Now the entire front and bezel has been given the white-out treatment. No details on when these might come to the states or if they are different models has been mentioned. For now they’ve just been seen a few times in Vietnam according to our tipsters.