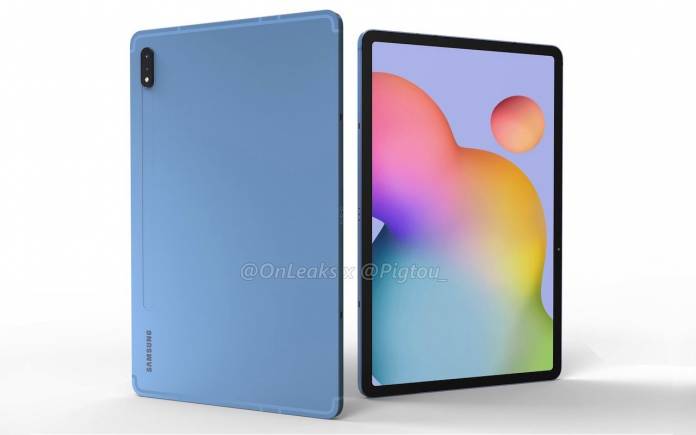 The Samsung Galaxy Tab S6 is about to get a follow-up. A Galaxy Tab S7 is rumored to be arriving with the Galaxy Fold 2 and Galaxy Note 20 series. With the Galaxy Tab S7, a Galaxy Watch 3 may also be introduced. Nothing is certain until an official teaser or announcement from the South Korean tech giant but we can’t stop image renders and related information from surfacing. The renders available show nothing new really–the tablet still looks like the previous model–which means it still looks like an iPad Pro.

This Galaxy Tab S7 is slightly thicker according to the dimensions specified– 244.5mm x 159.5mm x 5.7mm. The upcoming Tab S tablet is more rectangular compared to the iPad, making it better for watching movies and other entertainment.

Samsung’s Galaxy Tab S7 will feature dual cameras with flash at the back of an 11-inch display. We’re only imaging two cameras, not three. The selfie camera is now situated on the top left part of the screen. We doubt the South Korean tech giant plans on implementing very powerful cameras on a tablet anytime soon.

The tablet still works with an S Pen which sits at the back, on top of the Samsung logo. A source said the battery will be 7760mAh. That is more than enough for a tablet.

How about 5G connectivity? That is a possibility. You can only connect to such networks though in South Korea, the United States, and some parts of Europe. The Samsung Galaxy Tab S7 as rendered by Pigtou and OnLeaks may also arrive with a Plus variant. Launch date could also be earlier than the Unpacked event. As for the pricing, it could go just below $700.