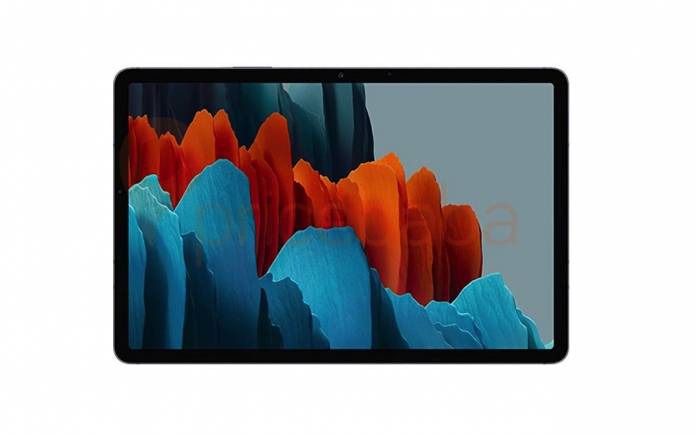 One of the five new devices that will be unveiled at the Galaxy Unpacked 2020 is the Samsung Galaxy Tab S7. We’re almost sure about this as several details and images have been leaked already. It’s another major product from the South Korean tech giant, following after the Galaxy Note 20 series as a premium flagship offering. The last information we gathered showed the new position of the selfie camera. It was also noted the Samsung Galaxy Tab S7 won’t have an in-display fingerprint sensor.

On August 5, we’ll get to see the new Galaxy Tab S7. It may arrive with a Plus version, as well as, the Galaxy Note 20, Galaxy Note 20 Ultra, Galaxy Watch 3, and a new pair Galaxy Buds (or Galaxy Beans). The next flagship Galaxy Tab S is said to come with an 11-inch LCD screen with up to 120Hz refresh rate, 2560 x 1600 pixel resolution, and Snapdragon 865 processor. The 128GB onboard can be expanded up to 1TB via a microSD card slot.

The next tablet from Samsung may be available in Mystic Bronze and Mystic Black. It could weigh 498g and measure 165.3 x 253.8 x 6.3mm. When it comes to the imaging department, there will only be a 13MP main camera on the rear and an 8MP selfie shooter. The battery will be 8000mAh.

The tablet’s audio will be tuned by AKG. It will definitely arrive with an S-Pen placed on a mount on the rear. Of course, it will also work with a compatible keyboard.

All looks great. Most of the specs are premium level but the mention of LCD is a bit disappointing. Samsung is known for using Super AMOLED or just AMOLED so we want to know why this one will only use LCD. Perhaps Samsung just wants to make the tablet series more affordable.