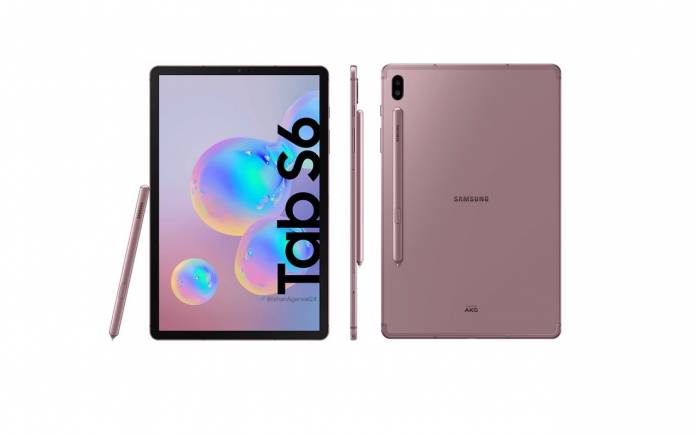 We trust Ishan Agarwal when it comes to new gadget leaks and early sightings. He has shared a number of leaked information that turned out to be true. The latest feature from him was the Galaxy Note 10+ in different colors. This time, another Samsung device is in focus–the Galaxy Tab S6. The new Android tablet was first said to arrive with dual cameras. Specs were made public before the official launch. More photos and features of the Galaxy tablet were also leaked.

New images have surfaced online, showing the colors of the Galaxy Tab S6. Samsung will be releasing the tablet in three colors: Blue, Pink, and Gray. The South Korean tech giant is skipping the Tab S5 although we remember there is a lite variant in the form of the Galaxy Tab S5e.

The Samsung Galaxy Tab S6 is said to come with a newer design. A new S Pen will also be part of it, ready with enhanced Bluetooth connectivity and maybe an S Pen camera. We’re not satisfied with the location of the S Pen though. Other features include a dual rear camera setup including a 13MP shooter with 5MP wide-angle lens plus the ToF sensor.

Don’t expect any headphone jack as Samsung is rumored to be doing away with that. When it comes to audio, four speakers Tuned by AKG will be present. POGO pins are included which means it can work with a charging dock or a keyboard. WiFi or LTE will be the standard with LTE being a special option.

Earlier, we mentioned there will be a brown Samsung Galaxy Tab S6 tablet but we don’t see any picture of it now. It could be a special edition color. Expect different storage and RAM options as with most Android tablets. Let’s wait and see for the official launch and market release.