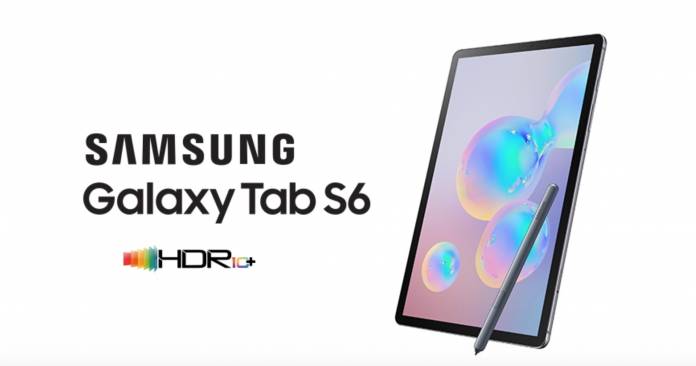 Android tablets have been noticeably lacking in innovation the past few years and so it isn’t really all that exciting when a new one is announced. Samsung, however, is hoping that will change with the announcement of their new and first flagship tablet, the Galaxy Tab S6. But what it’s really boasting is that it is the first-ever tablet to get HDR10+ certification, making it an ideal device to use if you’re watching TV shows or movies or playing games on the go.

While there are already smartphones that have HDR10+ certification, there have been no tablets yet that can meet the specification that can run the HDR or High Dynamic Range. Even the iPad Pro line of Apple has not been able to get that certification yet and only have regular HDR and Dolby Vision. But now Samsung is marketing the Galaxy Tab S6 as a premium device in their “innovative tablet range” as it has both the HDR10+ and supports the next-generation of HDR.

The next-generation open standard of the HDR10+ not just brings a greater contrast between light and dark parts of the image but it is able to optimize the brightness levels so you can get a truly immersive viewing experience. And because the Galaxy Tab S6 has Super AMOLED display and AKG and Dolby Atmos sound, you will be able to watch the videos that you want “as it was intended to be seen” with state-of-the-art visuals and audio experience.

The Galaxy Tab 6 has a 10.5-inch panel with a 2560 x 1600 display and is powered by a Snapdragon 855 SoC. You’ll get either a 6GB RAM with 128GB storage or an 8GB RAM with 256GB internal storage. You get a dual main camera (13MP + 5MP) and an 8MP front-facing camera. It has a pretty decent 7,040mAh battery and has the usual sensors. The S Pen has also been redesigned for the tablet and you have remote control functionality and wireless charging capabilities.

The HDR10+ certification will probably help in convincing people that Android tablets, particularly this one, are still worth having, especially for those looking for a mobile media-playing device. It will come in Mountain Grey, Cloud Blue and Rose Blush colors and will be available for purchase by late August in selected markets.