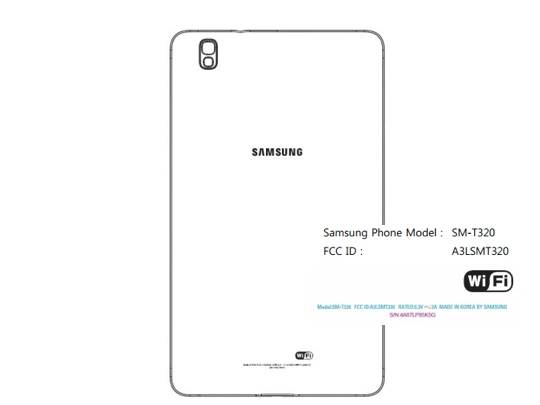 Samsung has been the topic of a few rumors lately. These have all been tablet related and touched on models to include the Galaxy Note Pro, Galaxy Tab Pro and the Galaxy Tab Lite. While we would expect these all to be officially announced over the next few weeks and months, it seems details of one in particular may have been revealed by the FCC.

An FCC filing has recently been discovered and it brings talk of the SM-T320, a device that is believed to be the Galaxy Tab Pro 8.4. The filing has this dubbed as a “portable tablet” and one that has WiFi and Bluetooth. Also, as seen in the FCC sketch, the tablet has a rear-facing camera with flash. Nothing surprising with the camera, as Samsung tablets have long had those sitting on the backside.

There was also measurements and those show 128mm for the width, 219mm for the height and a diagonal of 240mm. All said and done, this is just one piece of the puzzle, which means moving forward we are going to be on the lookout for further details on the SM-T320 model number. Lastly, while CES is quickly approaching, rumor has it that Samsung will wait until February for an unveil during Mobile World Congress.