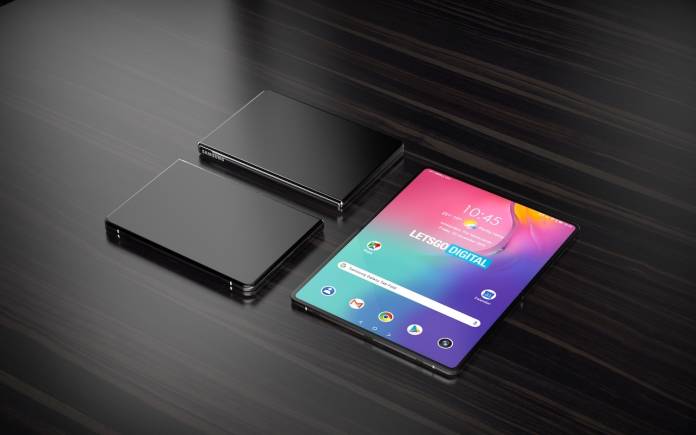 The Samsung Galaxy Tab line is still active but it needs a boost. The tablet market isn’t exactly getting more popular so this category is just stagnant. There aren’t many people buying tablets now because smartphones are becoming more popular. They’re also bigger too so there really is no need for a tablet. Samsung is still in the tablet business. In fact, it remains to be one of the more prolific ones. Just last month, we were introduced to the Samsung Galaxy Tab Active Pro only a few weeks after the Galaxy Tab S6 as the first 5G tablet was announced.

Another one is in the works although we are not sure if and when it will be ready. After the foldable phone, Samsung appears to be venturing into a bigger device. A foldable tablet could be next. It could be different for the next-gen Galaxy Fold 2 that has also been mentioned here to come with different display technology.

A Samsung foldable tablet sounds interesting. We’re imagining something that may probably replace touch tablets or laptops because the display is large enough. The South Korean tech giant is believed to have filed a patent for a Samsung Galaxy Tab Fold.

It’s still just a design patent as submitted last May 9, 2019 to the Hague International Design System and was recently approved on November 15, 2019. The Samsung Galaxy Tab Fold has been rendered by LetsGoDigital based on the images and patent sketches published.

The foldable tablet folds horizontally. The result is a large flexible screen. There seems to be no secondary display though so it just looks like a touch laptop. It really looks more like a tablet now because of the size of the display.

The Samsung Galaxy Tab Fold isn’t the official name. It’s just a code name that the South Korean tech giant may adopt someday. It’s actually too large for a smartphone. We notice though there is no camera that’s okay because these are only rendered images so the features and design may be incomplete. Let’s wait and see.