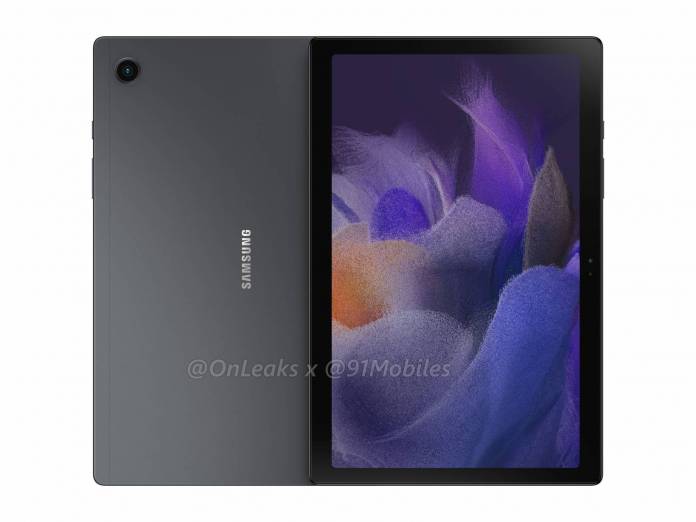 We don’t have an official statement yet from Samsung but we’re getting a look at what the reportedly upcoming Galaxy Tab A8 2021 will look like. The successor to the mid-range Galaxy Tab A7 is expected to be announced sometime this year but already we’re seeing leaks and rumors about the specifications of the tablet and now we might have a “first look” through some leaked 5K renders and even a 360-degree video. Of course these are just renders so the final look may actually be different.

91mobiles shares their collaboration with Steve Hemmerstoffer aka @OnLeaks on Twitter showing off the upcoming Galaxy Tab A8 2021 through 5K renders and a 360-degree video. It still has the usual tablet rectangular form factor with still thick bezels surrounding it. There’s still the front-facing camera located on the right bezel and the volume rocker and fingerprint sensor located on the right spine. At the back you see the Samsung logo and a single camera sensor while the top part has twin speaker grills and a microphone and the bottom has two speakers, a USB Type-C port and a 3.5mm jack.

So basically, the physical look of the tablet is not something new. When it comes to the actual specifications of the Galaxy Tab A8 2021, it will have a 10.4-inch display which will most likely have an FHD+ resolution and will be 246.7 x 161.8 x 6.9mm (8.7mm if you include the rear camera bump). The main camera will have an 8MP sensor while the quad speakers will support Dolby Atmos. There may also be an LTE version aside from the Wi-Fi model but the former will of course be a bit pricier.

Of course these are just rumors, leaks, and speculation about a tablet that has not yet been officially announced. Most likely, Samsung will be releasing a new tablet to succeed its current Galaxy Tab A7 line and we can assume that it will not be so vastly different from the current specs so these renders are most likely not that far off. We don’t expect much from Android tablets as of now but it’s long overdue for some new things, to be honest.

There are no other specs available for now about the supposed Galaxy Tab A8 2021. There’s also no timetable yet for an announcement so we’ll be updating this in case we get more news about the tablet.