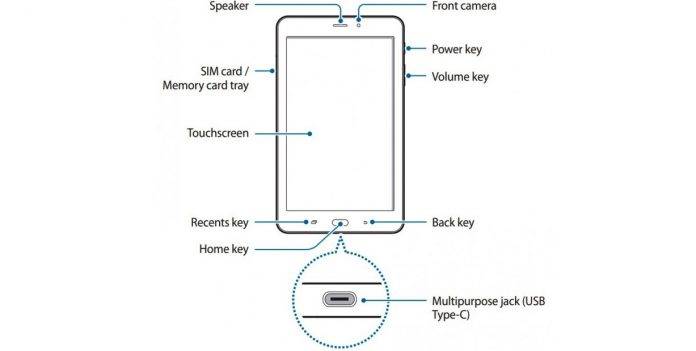 Last week, the Samsung Galaxy Tab A 8.0 2017 model reached TENAA. That meant the device will be released soon in China. We’re guessing it will be made official at the IFA in Berlin especially now that a product manual has reached the public domain. No doubt the tablet will be announced soon and we’re excited to know if it will have a better 8-inch screen and a large 5000mAh battery.

Details shared were scarce but the manual tells us the tablet with model number SM-T385 will come with 4G LTE connectivity, stereo speaker, USB Type C, Nano SIM plus microSD support, and the Bixby assistant. There’s the standard rear camera with flash, microphone, GPS antenna, and an earphone jack based on one illustration provided.

The product manual also includes images of screens that show recommended content, upcoming reminder, home screen, apps screen, and suggestions on how one can swipe or control a particular page.

The user manual in English can be found HERE. Perusing the document is enough to convince you the new Samsung Galaxy Tab A 8.0 is real. We can see a rundown of the basics from device layout and functions to the battery, initial setup, transferring data from an old device, notification panel, and understanding the screen. Some of the tablet’s apps and features include Bixby Home, Multi window, Samsung Notes, Samsung Flow, My Files, Game Launcher, and the standard Google apps.