Samsung has indeed taken notice of how much children these days are making use gadgets and see in it a potential and profitable market. The manufacturer is releasing its first tablet for kids to help make the time spent by children on the device more educational and entertaining.

We reported yesterday on leaks of a child-friendly tablet that Samsung was preparing to unveil. That has now become the real deal and the hardware matches what we’ve seen, which is basically a kiddie version of the Galaxy Tab 3. 1.2 GHz dual-core processor, 1 GB of RAM, 8 GB of internal storage expandable to up to 32 GB via a microSD slot, and a 7.0-inch 1024×600 WSVGA TFT screen. The tablet runs Android 4.1 Jelly Bean and comes pre-loaded with content and apps for education, games, entertainment, and books.

Parents won’t have to worry too much as Samsung provides several features to ensure the safety of kids. Aside from Samsung’s own app store, the Galaxy Tab 3 Kids also features a Kid’s Store which is presumably a curated selection of child-friendly apps and content. Parents will also be able to choose a selected number of apps that a child could have access to. A password-protected Time Management system also allows parents to set an amount of time for the child to use the tablet, locking the device when the allotted time has run out. 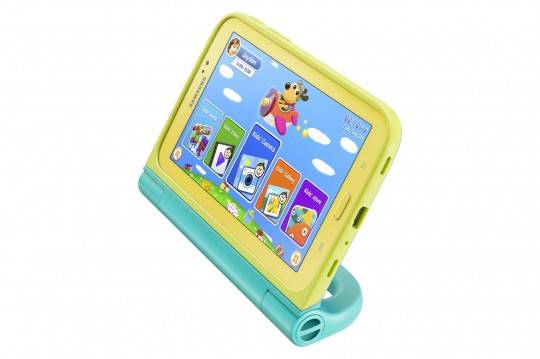 The Galaxy Tab 3 Kids is available in a yellow color only but it also comes with optional accessories like a Kids Case for easier gripping, multiple stand options, and a C Pen for drawing. No price has been announced yet but the tablet will be available in Korea in early September, to be followed by China, Europe, the US, Africa, South America, and Southeast Asia.