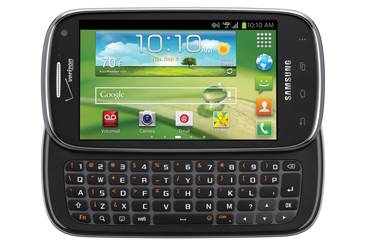 After hearing plenty of rumors about it, the Samsung Galaxy Stratosphere II has finally been confirmed for a Verizon launch. Verizon announced the phone today in a News Center post, revealing that it will be available “in the coming weeks.” Unfortunately, Verizon didn’t get anymore specific than that, so we don’t have an exact launch date for the Stratosphere II just yet.

The Stratosphere II will come running Android 4.0 Ice Cream Sandwich out of the box, so those who pick this up will be missing out on Jelly Bean. It features a 4-inch Super AMOLED display, a dual-core 1.2GHz processor, and that slide out QWERTY keyboard we’ve seen plenty of times in the lead-up to its reveal. It also comes equipped with NFC capabilities, meaning that you can use S Beam with this bad boy.

Verizon and Samsung are touting the Stratosphere II as a business phone. It’s a global ready device that features support for VPN and comes packing things like Microsoft Exchange ActiveSync and AES 256-bit encryption to keep information on lock down and secure. Verizon’s post doesn’t delve too much into the Startosphere II’s hardware, which suggests that the phone’s specs aren’t anything to write home about.

Nonetheless, if you think the Stratosphere II might be the phone for you, you’ll be able to pick it up from either Verizon’s website or its stores for $129.99. That’s a pretty manageable price, but be warned that you’ll have to sign a two-year contract and take advantage of a $50 mail-in rebate in order to get the Stratosphere II down to $130. Keep an ear to Android Community, as we’ll update you once we know more about the Samsung Galaxy Stratosphere II!