No, this isn’t another April Fool’s Joke but the Samsung Galaxy S8’s facial recognition can be compromised. Perhaps some of you have already planned on how to try and hack the system but someone managed to unlock a phone using a photo of himself. Biometrics do work but we didn’t expect that even just an image of a person would be enough. This shows the technology works but not in the way we want.

This discovery could have an effect on the Galaxy S8 and S8 Plus sales but it’s too early too tell. The phone used on the video is only a demo unit. Then again, we’re not surprised about what happened. Aside from iris recognition, the Galaxy S8 has the facial recognition as another layer of security. Some guys on the Marcianio Phone registered his phone on the S8 and then unlocked it with a photo.

Biometrics is usually reliable. Unless you cut off a finger or get an actual eyeball (gross) to use on a scanner, you can’t get in. We haven’t heard of similar incidents but as you can see in the video, the S8’s security if compromised. This means anyone can easily get your phone and use your photo to unlock the display. 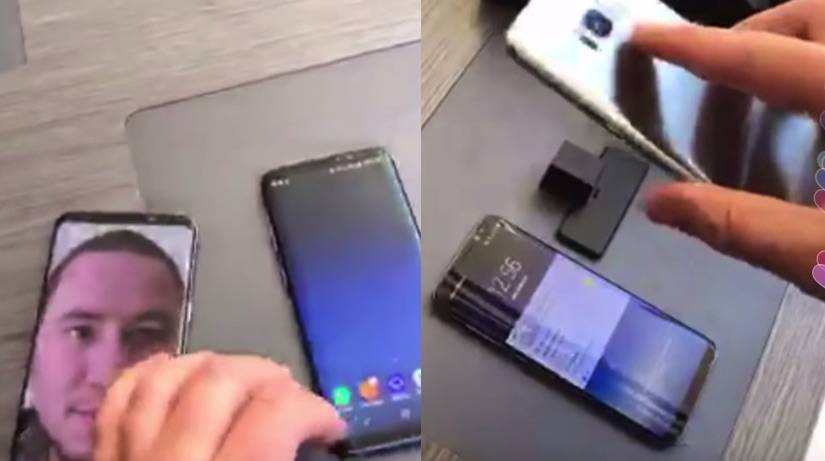 This is one issue Samsung needs to address because the company has been boasting about the feature. The company did release a quick response. Read on:

The Galaxy S8 provides various levels of biometric authentication, with the highest level of authentication from the iris scanner and fingerprint reader. In addition, the Galaxy S8 provides users with multiple options to unlock their phones through both biometric security options, and convenient options such as swipe and facial recognition. It is important to reiterate that facial recognition, while convenient, can only be used for opening your Galaxy S8 and currently cannot be used to authenticate access to Samsung Pay or Secure Folder.

So facial recognition is only to unlock the phone? Saying it can’t be used to authenticate access to Secure Folder or Samsung Pay isn’t exactly reassuring as the phone can still be compromised further. You see, once you unlock the phone by whatever means, you can do a number of things inside the phone. Even without accessing a folder or using Samsung Pay, the issue here is that facial recognition can be bypassed.

What do you think about this? Feel free to leave your thoughts below.