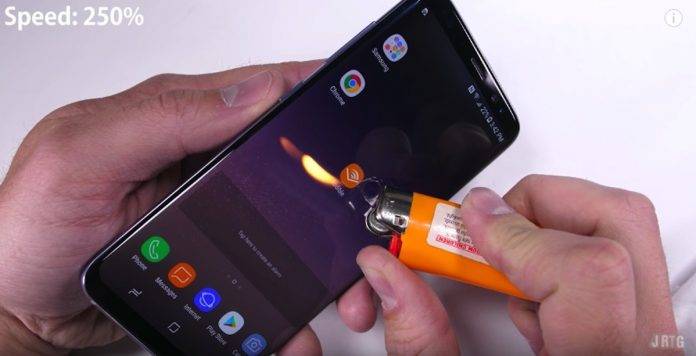 We’ve all been waiting for this. Of course, we’d love to do our own but naah, we’re not that privileged enough and we don’t have the heart to try and destroy a highly expensive and premium phone like this Samsung Galaxy Galaxy S8. Our master durability tester Zack Nelson aka JerryRigEverything is our go-to guy for such. As usual, this stress test is done the same way other phones have been used and abused.

Is the Galaxy S8 as durable as Samsung promised? Even before watching the video, we have a feeling it will come out victorious. Most high-end devices from Samsung survive rough tests so we expect this one will be the same. Our only concern here is the battery but we doubt Zack’s test will reach that point of a battery overheating.

An orchid grey Galaxy S8 is the subject of this test. It looks nicer and different from the usually silver, gold, or black version. This phone scratched at level 6 which is the standard for such premium phone.
There’s a sapphire screen version of the S8 and we’re expecting that to scratch at level 8 or even 9.

You’ll notice this one has no physical home button which allowed the display to be larger—almost bezel-less. The speaker grill doesn’t protrude and can be found below the glass surface. That could gather some dirt, lint, or dust. This isn’t the usual design but Samsung decided to go with it.

Scratching the iris scanner and the 8MP front-facing camera, the razor blade doesn’t leave any marks. On the rear side of the phone, the fingerprint scanner scratches with noticeable marks but still functions when checked.

Putting the AMOLED screen under fire will show a white mark after 30 seconds. It completely recovered with no marks. As for the bend test, the Galaxy S8 has proven to be of the highest build quality. Bending the device from the front and back don’t show any flex and no seals are broken. This means the phone is still water-resistant.

Zack puts this phone in his list of some of the best and well-built phones today. He even said that the Galaxy S8 could be his daily driver.