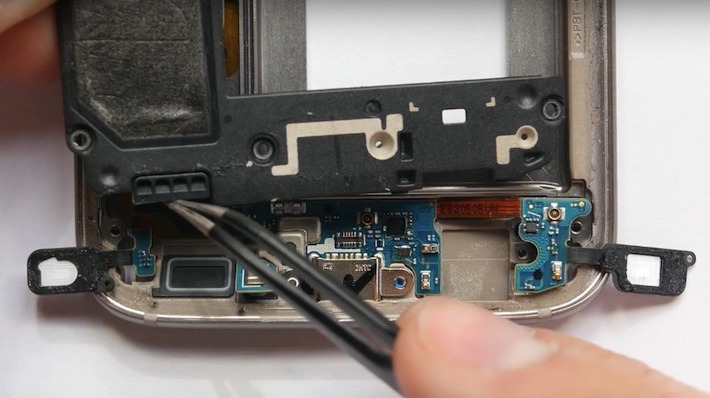 Just in case you’re still wondering if the Samsung Galaxy S7 is waterproof, well, it’s NOT. It’s simply water-resistant as indicated by the IP68 certification. This means phone can resist water penetration although not completely. As we already noted, there is a big difference between being water-resistant and being waterproof. But how is the Samsung Galaxy S7 able to resist water then as shown off in the promo videos we’ve seen?

The answer can be discovered in this new video by JerryRigEverything. Zack really knows the common questions of consumers so he’s making the first steps every time. He knows that being IP68 water-resistant is different from being waterproof and noted that there is a water damage indicator inside. This tells if the phone went into contact with water already.

The Samsung Galaxy S7 is IP68 water-resistant. The indicator inside found at the bottom near the SIM card tray stays white until it gets wet with moisture, steam, or sweat. It will bleed out and turn into a pinkish color. No need to open the phone because taking out the SIM card and looking inside is just enough. Another one is found on top of the loudspeakers but a smaller one.

The phone edges are glued together with a super sticky residue that keeps the water from coming in. It’s not enough so the phone also relies on screws to keep the materials pressed up against the frame. Ports usually are covered by a rubber seal around the edge too which keeps the water out but only if less than 1.5 meters of water. Any more than five feet, water pressure may be too great and may force itself past the rubber seal and then into the phone finally. The phone speaker stays waterproof by placing a small screen behind the holes. The said screen allows sound to pass through but still keep the water out.

Watch the video below and see what makes the Galaxy S7 waterproof…errr, water-resistant: