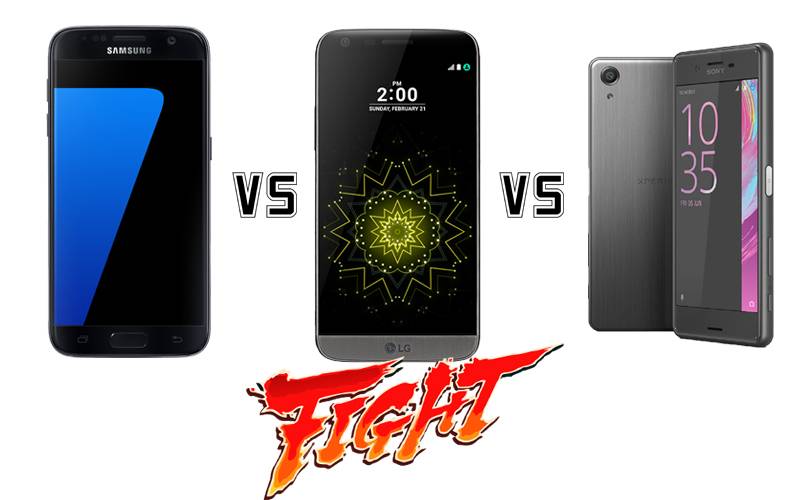 So it has come to this. At the end of a week full of new smartphones and wonderful new gadgets from the Mobile World Congress (MWC 2016) in Barcelona, we pick out the top flagships of the lot and put them in a three-way specs comparison. First up is the brand new flagship from Samsung, the Galaxy S7. Sure, you’re probably getting a better phone in the Galaxy S7 edge, but allow us to compare the vanilla flagships on principle. Then we have the new (and modular?) flagship from the “other” Korean gadget giant, the LG G5. And lastly, here comes the Japanese competition – Sony totally ditching their “Xperia Z” naming convention and going with a small-ish but robust Xperia X Performance. Who will win? And who’s your money on, literally?

We start with the display. The two Korean flagships sport QHD screens at 2560×1440 resolutions, although as the LG G5 has the bigger screen (5.3 inches), this means the slightly smaller Galaxy S7 display (5.1 inches) wins out on pixel density (577ppi). But at 554ppi, the LG G5’s display is no slouch at all. Curiously, Sony chose to go with a FullHD (1080p) resolution on a small 5-inch display. They may be thinking that their excellent TRILUMINOS color saturation enhancement technology will make up for the lack of pixels. Then again, we can barely call it a “lack of pixels” – Full HD is still stunning. But at flagship levels, we need to consider Sony’s smaller resolution as a handicap. 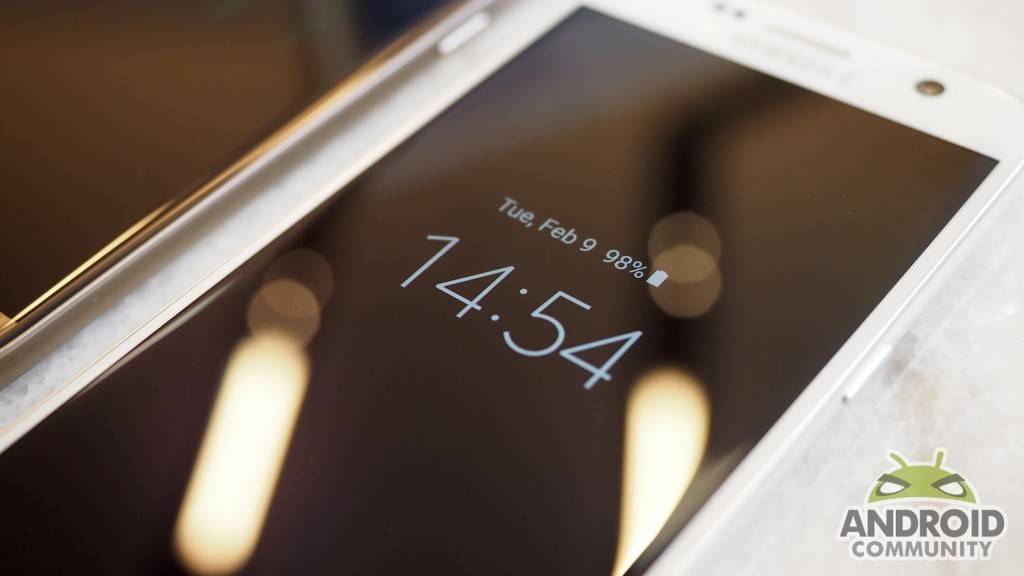 So the question boils down to the Galaxy S7’s Super AMOLED display, or the standard IPS LCD screen of the LG G5. Arguments for both technologies from their own set of fans will be long and many, so we might as well put this under the realm of preference.

THE WINNER: We will give the Galaxy S7 a marginal win on this element, due mainly to the small advantage it has on pixel density.

When it comes to physical design, we are looking at what the flagships are bringing to the table in the realm of form, engineering, and innovation.

While Galaxy S7 made some small design changes, it still resembles the Galaxy S6 a lot. Samsung seems to have this “no radical changes” rule in aesthetics. It did listen to the crowd in one area though, and we have to give them props for returning the microSD slot after ditching it in the Galaxy S6.

The LG G5 probably has the most radical approach to design among the three – with that “magic slot” affording the device a semi-modular approach. Check out the video below if you don’t know what we’re talking about.

The Sony Xperia X Performance is a continuation – and maybe a slight improvement – of Sony’s patented “OmniBalance” design language. They have made some gorgeous phones in the past and there’s probably no reason to ditch that system yet. They have changed slightly, going with a brushed metal back instead of the usual glass covered approach. There is glass, and curved at that – a stylish soft curve towards the edges.

THE WINNER: The LG G5 has the most radical approach to design this year, and we’ll give them this round just for the audacity to try something new.

In the chipset, we will probably be expecting the stiffest of competitions. Surprisingly at this level, this might be the most boring part of the story – flagship level phones tend to gravitate towards the best chipsets available.

Samsung Galaxy S7 variants will have either the Qualcomm Snapdragon 820 (quad-core) or the comparative Exynos 8890 (octa-core). There might be slight differences between variants, but those will mostly be negligible. Suffice it to say these processors will be the fastest ones around. Samsung’s flagship will be supported by 4GB of LPDDR4 RAM (low power, double data rate RAM is a Samsung technology). The LG G5 will be using the same SD820 chipset, with 4GB RAM. The Sony Xperia X Performance will use the same SD820 processor, but with lower 3GB RAM.

In the end, it might be the software execution that will win the day for any of these phones. But that will take in-depth reviews to get to, and we don’t have that data now. 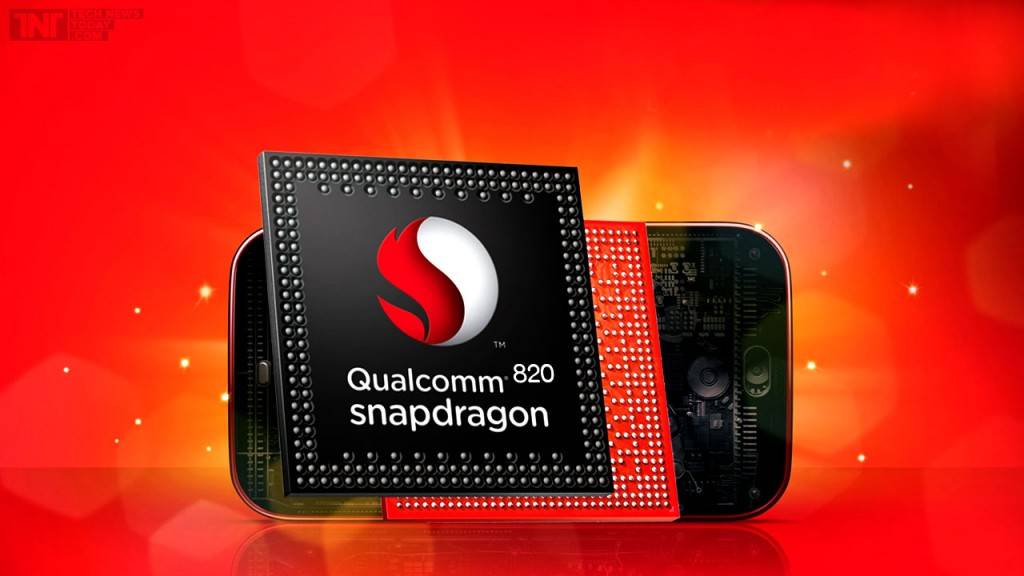 THE WINNER: We will mark this as a tie between the Galaxy S7 and the LG G5. The 3GB RAM on the Xperia phone is by no means slow, but in this company, it will be sorely lacking.

The Samsung Galaxy S7 is strangely going out with a camera module that has a lower pixel count – 12MP. But Samsung’s “Dual Pixel” technology might carry the device through, as this means that for every pixel in an image, there are two light-sensitive photodiodes working together in the camera module. The result is faster focus speed all around.

The LG G5 will not back down on camera specs as well. We’re talking about a 16MP sensor, significantly higher pixel count than the Samsung one, with laser autofocus that will enhance pictures.

The Sony Xperia X Performance will be sporting Sony’s best camera module for sure. The 23MP Exmor RS sensor not only features a gargantuan pixel count, it has the fastest autofocus among the three at 0.1 seconds. Sony calls this a Predictive Hybrid Autofocus. Also, the Sony phone features a 13MP front camera, which would be main shooters already in other devices. 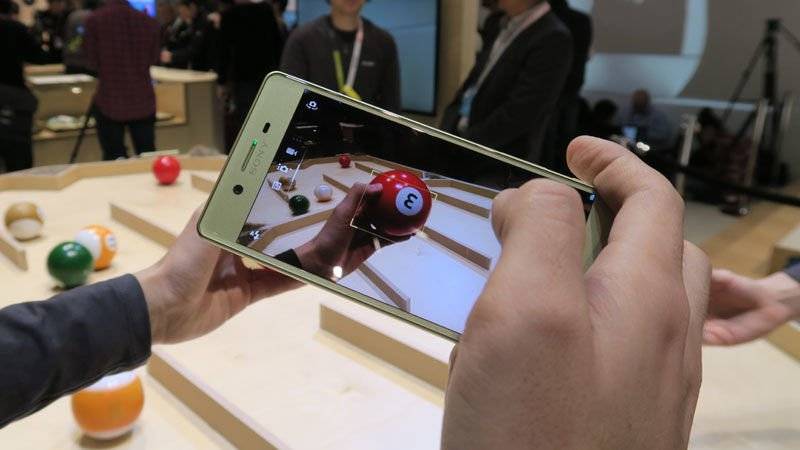 THE WINNER: We will most likely need a good and balanced review for the cameras to be really scientific about it. But on the specs alone, we give this one to the Sony Xperia X Performance.

The Galaxy S7 has a 3,000mAh battery, the largest among the three, but it also has a 5.1-inch QHD display to push pixels to. The Super AMOLED design will help in keeping the battery consumption down, enough that the S7 can still feature an “Always On” feature.

The LG G5 has the same “Always On” feature as with the Samsung phone, but the LG device has a smaller 2,800mAh battery. On top of that, the LG sports a rather large 5.3-inch IPS LCD display.

The Sony Xperia X Performance is able to promise a “two day” uptime on a single full charge. That is a combination of the small 5-inch screen, the lesser 1080p resolution, and basically more efficient hardware, that they can even go with just a 2,700mAh battery.

All phones have some sort of fast/quick charging technology.

THE WINNER: We will give this element to the Samsung Galaxy S7, due to the larger battery and the AMOLED screen.

All the other features are mostly mirrored. Everyone has microSD expansion now. The Samsung Galaxy S7 has IP68 water and dust resistance rating, and this is par for the course for the Sony Xperia X Performance, as the Japanese manufacturer always has this in its pocket. The LG G5, with its new modular design lacks this.

All three has some sort of fingerprint security sensor, and internal storage for all devices start at 32GB.

So if we’re talking just about the specs and all things considered, who wins? We’ll mark this as a slight victory for the Samsung Galaxy S7. What do you think? Let us know in the comments.