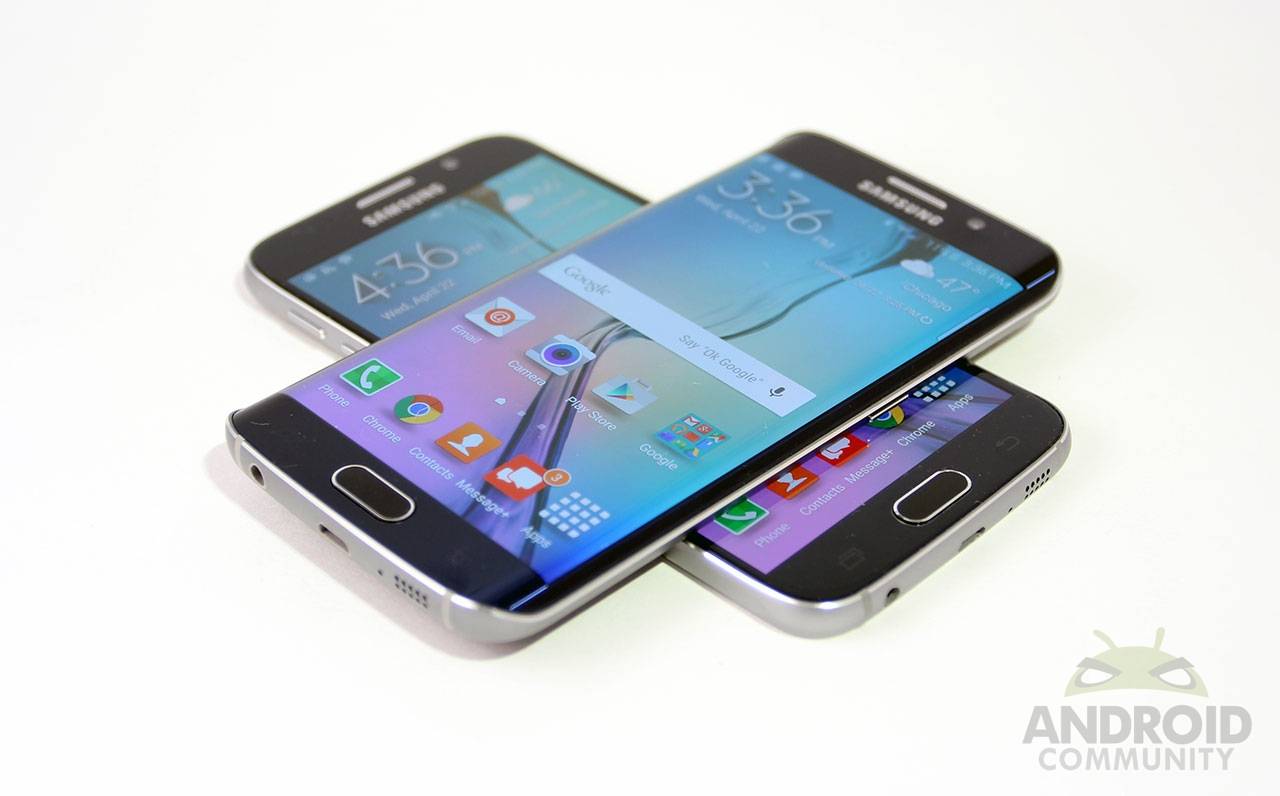 The first question you should be asking yourself – after you’ve decided on a Samsung Galaxy S6 – is whether or not you want to go with the Edge. Your choice will influence the rest of your life in the smartphone environment. While the Galaxy S6 and Galaxy S6 Edge have a LOT of the same elements, they present ever-so-slightly different aims for Samsung in the smartphone universe. Samsung presents you with two options and a question: do you want the best of today, or a glimpse of tomorrow?

Under a flashy exterior lies one of the most powerful processors yet released for a set of mobile device – for a smartphone, anyway – as well as the ability to connect to today’s fastest mobile data speeds. Outside you’ll find Gorilla Glass 4 across this device’s face and an entirely unique approach to displaying your content. 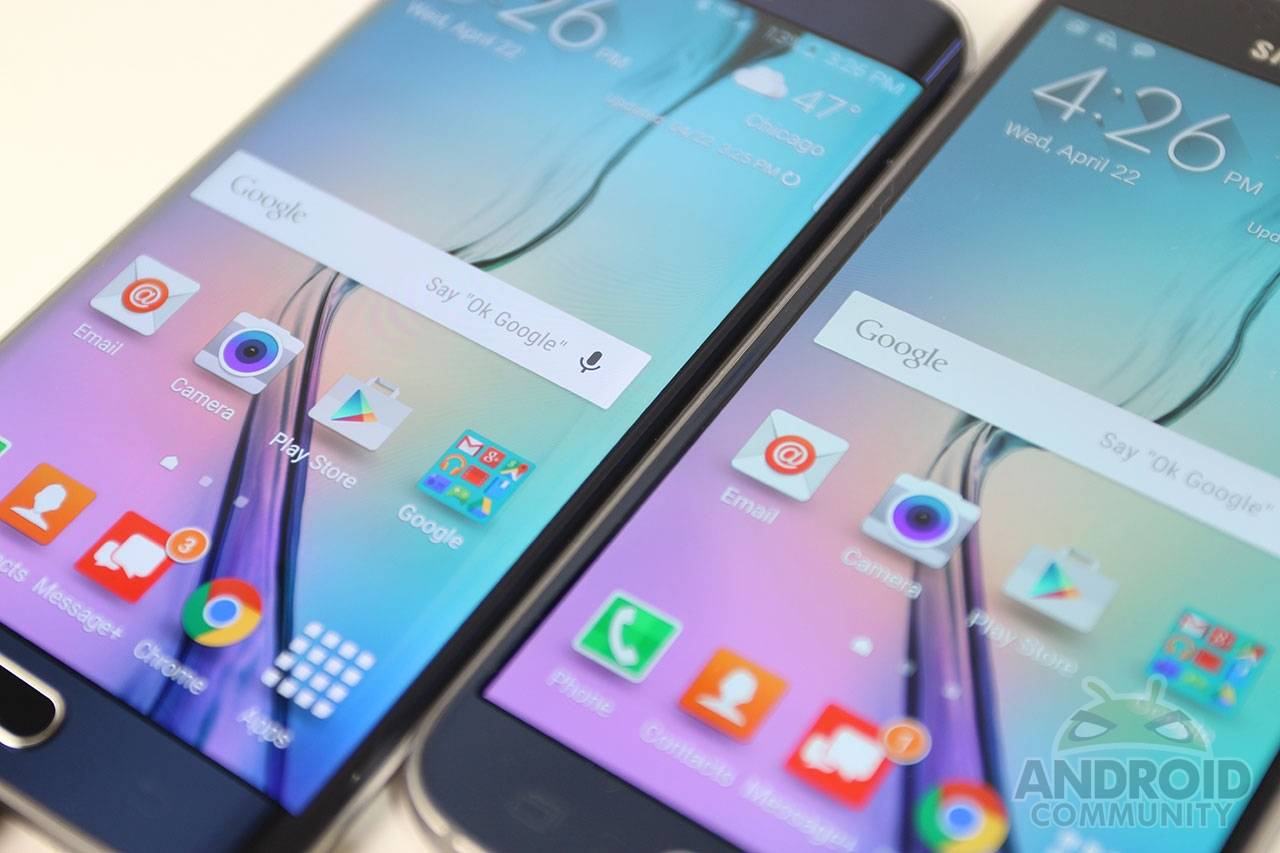 The display here is the obvious headliner (before you get to the camera, that is to say).

Just as dense and bright as the Galaxy S6 but also coming in strong with a unique curve, the S6 Edge presents nothing less than a new age for the smartphone.

Gone are the days when competition is limited to having the sharpest display and the most powerful processor. Now we’re bending the rules, so to speak, and leaking on into form factors that change the way we see the smartphone.

Of course if you DO want to live in the “which display is best” universe, Samsung still competes. 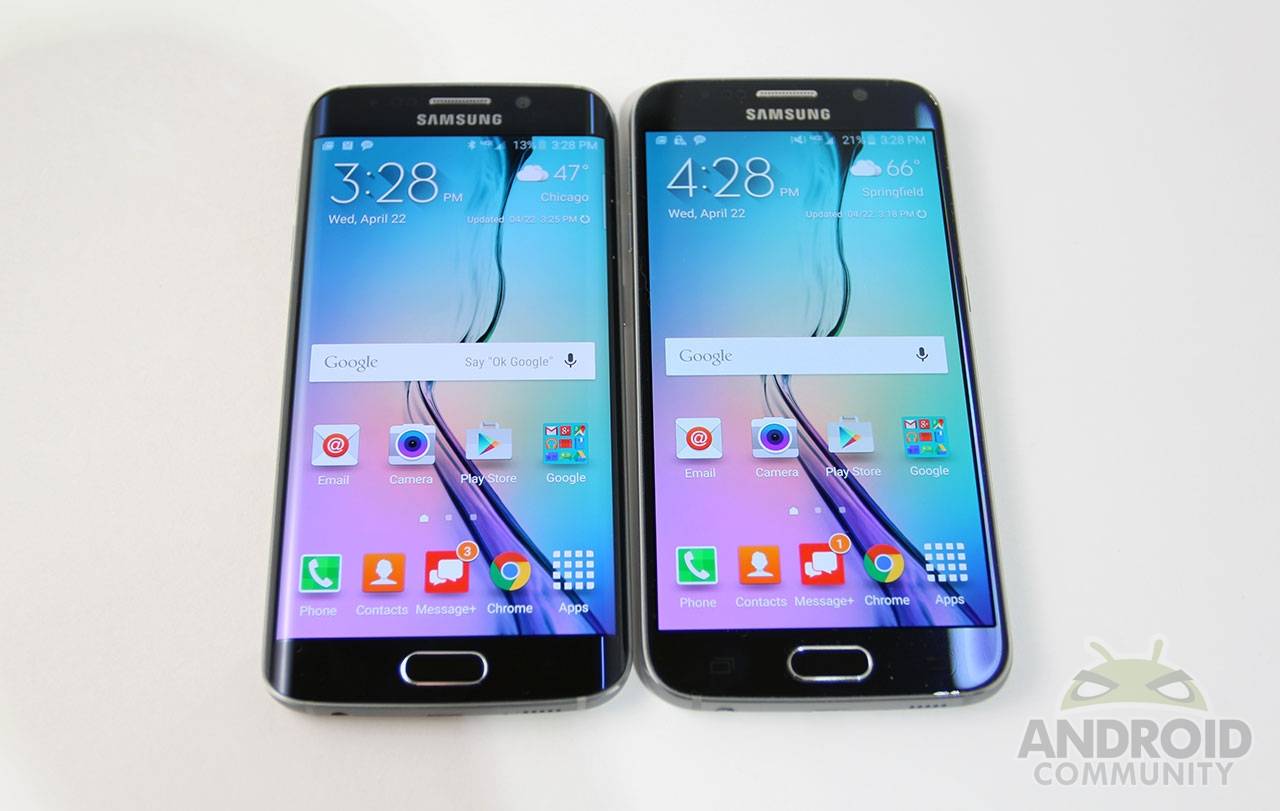 The same is true of the Galaxy S6, with more pixels smashed into a dense space than your human eye can perceive. Lucky you!

Look above and below and see the color-correctness. 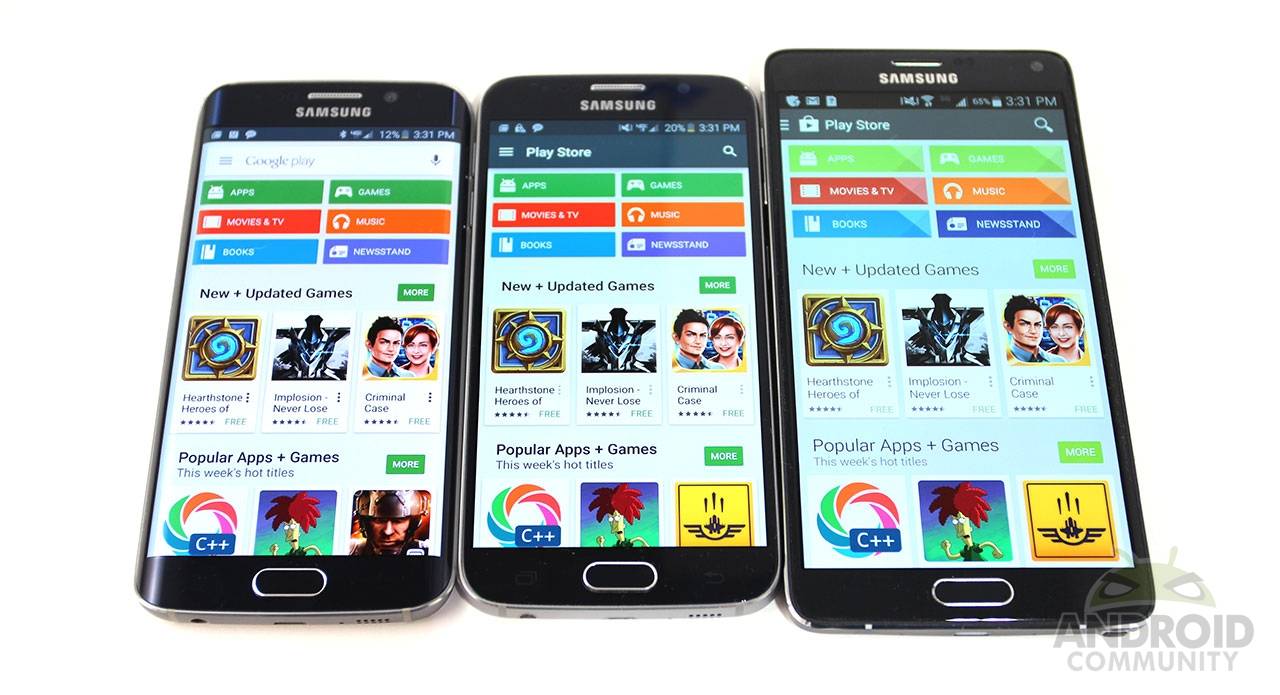 If you loved the Galaxy smartphone line for its removable battery and microSD card slot, you may have to turn back now – neither are present here.

You DO get 32GB internal storage at minimum, but you’ll want to consider the largest version of the device (storage-wise) if you do decide to jump aboard.

There’s a big piece of hardware at the back of the device that sort of cuts into the otherwise flawlessly smooth feel of this entire presentation. It’s a camera array – and it’s surprisingly large.

If Samsung could be excused for such a strange lump for any reason, the quality of the media it produces must be one of them. This smartphone has the nicest camera we’ve ever seen on an Android device, bar none.

The edges are fantastic to hold in one’s hands, and the smooth edges of the display glass bring that sort of glorious new feeling only a never-before-seen technology can. 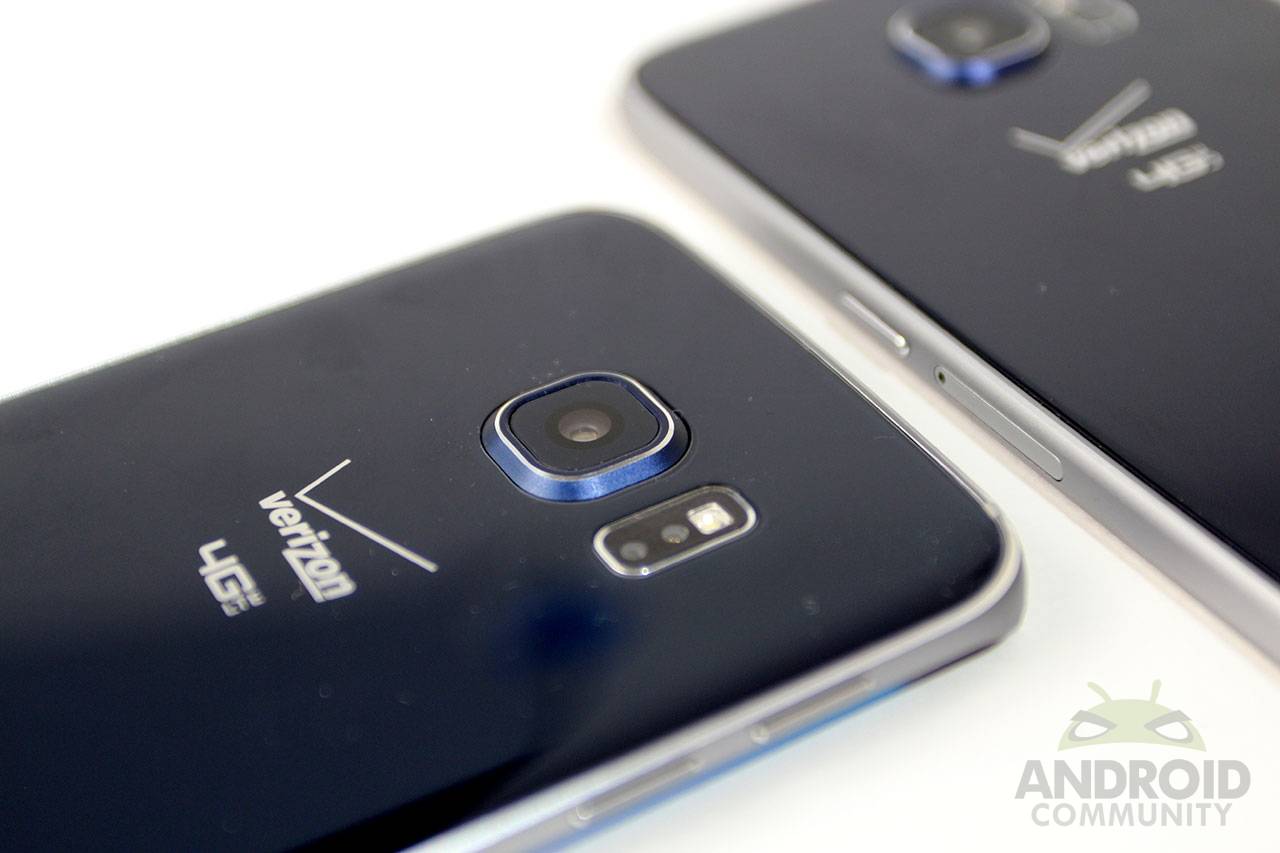 Now that Samsung works with metal around its edges – on the edges of this Galaxy S6 Edge – this whole package seems a full step above anything the company has produced before.

This is a premiums smartphone. For the first time ever with a Samsung smartphone we can completely comfortably say that this device’s premium quality is top-tier.

Built-in wireless charging finally feels like a standard. While several brands have been pushing the technology in devices for a couple of years, now that the largest of the Android hardware makers is aboard in their hero phones, it feels like we can recommend everyone go forth and purchase the pads. Or go to Starbucks and charge up whilst on the go, of course.

Inside you’ll find a well-packaged Samsung, very aware of their past. While previous versions of Samsung’s user interface presented a massive array of apps made by the company, here they’ve made great use of folders right out the gate.

While we still DO have a large amount of apps, Samsung presents just two screens of apps in the standard apps drawer. Unpackaged, un-foldered you’ll find more, but our immediate impression is one of relief – we have room to breathe! 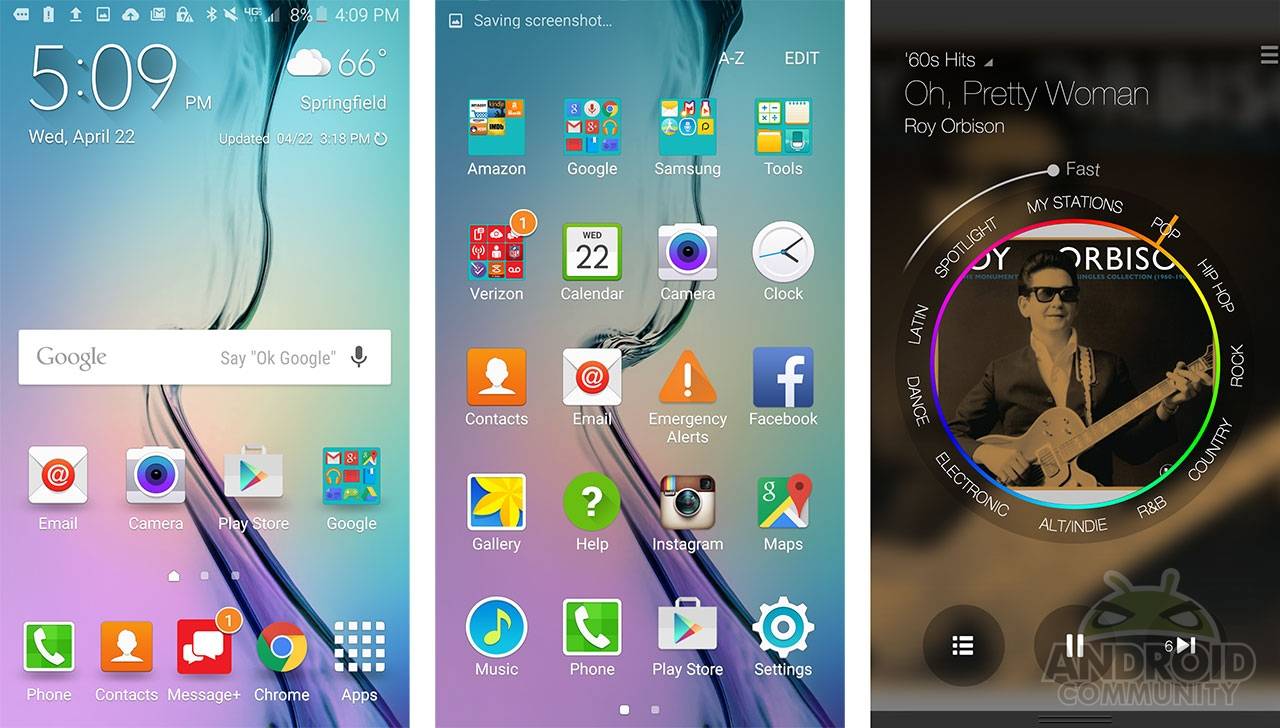 Inside you’ve got a barrel of Microsoft apps – Office, Skype, and the like, as well as Google and carrier apps. Samsung’s folder contains 7 apps, two of which are “Milk” related.

If you don’t feel especially sheepish at the prospect, we’d recommend checking out Milk Video first. 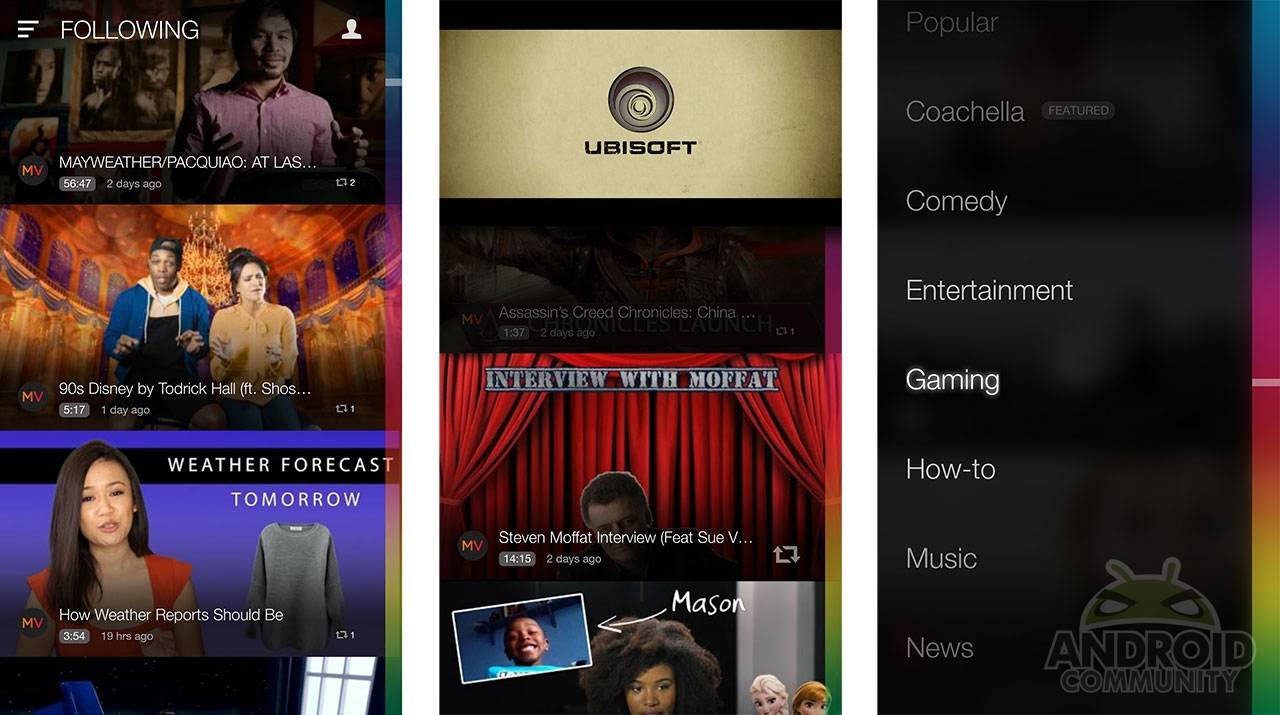 There you’ll find a curated collection of videos that’s updated regularly from several sources. This is Samsung’s attempt at being a real authority on media presentation, and they do a pretty good job of it.

In the end, the Samsung Galaxy S6 and Edge take what the previous couple of Samsung Galaxy smartphones have presented, and it takes the axe to them. Not necessarily in bulk, but again, in presentation.

This phone feels a lot lighter than the Galaxy S5 and Galaxy S4 as far as software goes, and it’s a lot better for it. 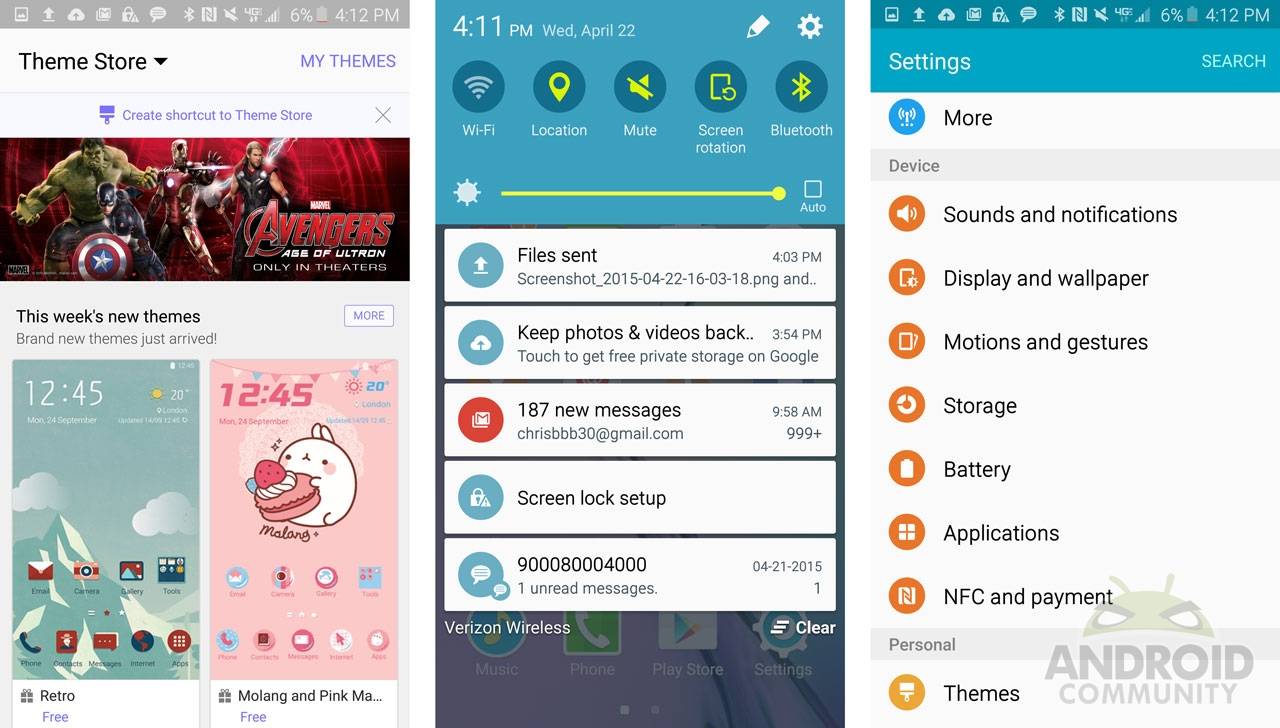 As far as Edge-specific software – there’s not a lot. There really doesn’t need to be a lot – the device’s edge isn’t so deep that it needs to have its own reason for existing.

If you really NEED to use the edge, Samsung incorporates a nice little pull-in feature which allows you to attach several of your most-contacted contacts.

Whenever one of these contacts calls you, you’ll see a lovely wobbly little ripple of color appear at the Edge – pull it out and you’ll find them appearing with options.

You also get the same “Night Clock” feature you had with the Galaxy Note Edge, providing you with some helpful side-eye action in the darkness.

While the display is awesome on both the Galaxy S6 and the Galaxy S6 Edge, the real stand-out feature on this device line, for me, is the camera. These devices present the best camera array we’ve seen on an Android device in the history of Android devices. That includes cameras that just happen to run Android. 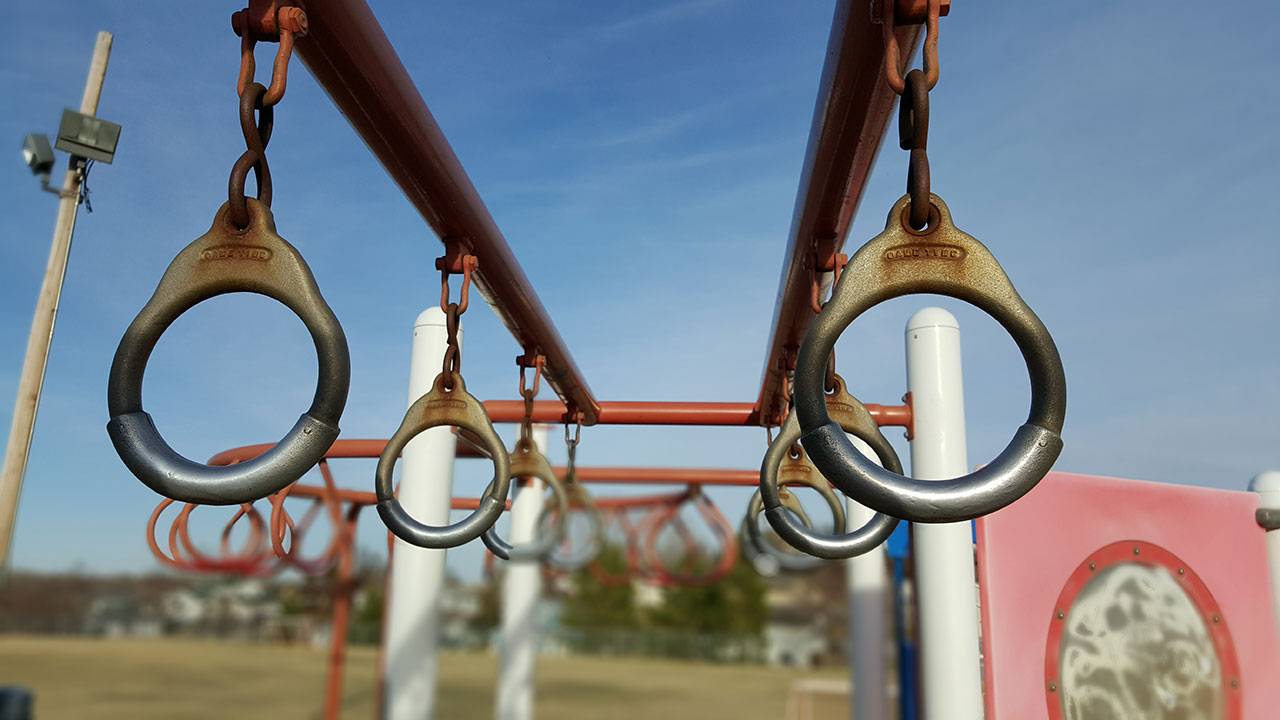 The controls on Samsung’s cameras here are simplified – parred down to the most basic of options while you’ve got the ability to download whatever you’d like to expand what you can do. 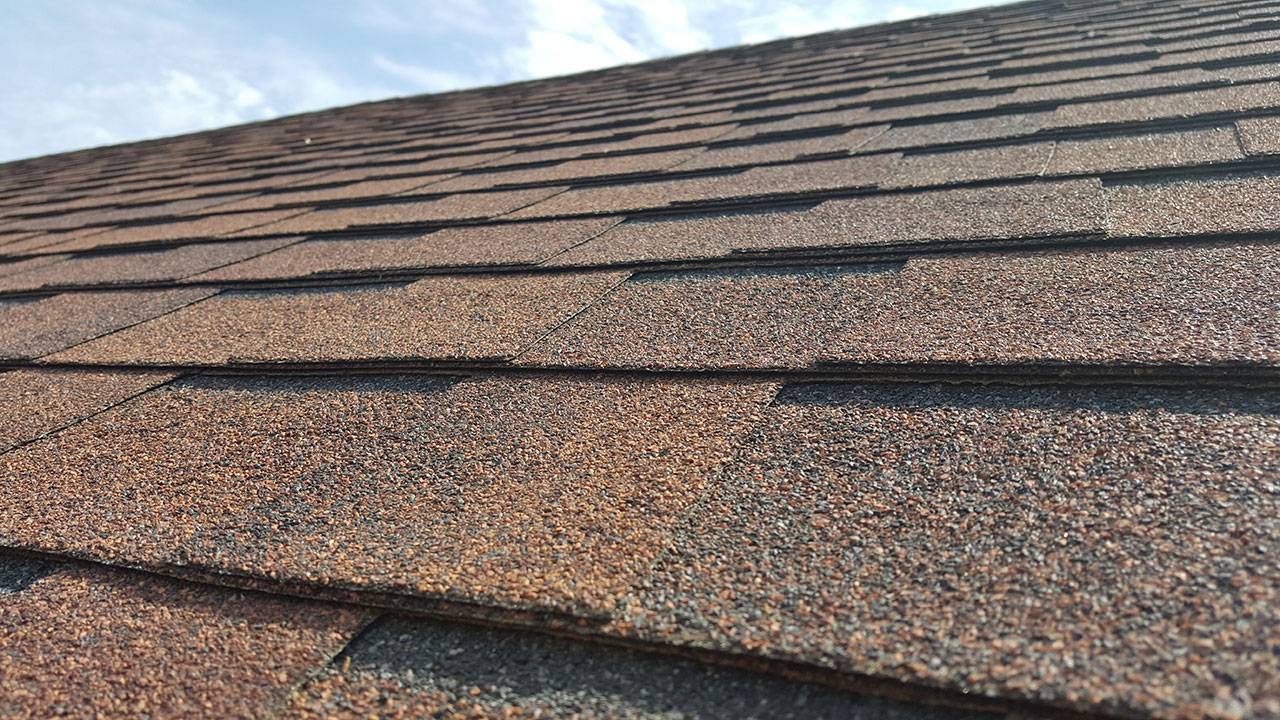 Above and below you’ll see a variety of examples of what’s possible with this camera on the Galaxy S6 and the Galaxy S6 Edge. As far as we’ve been able do tell, both cameras perform exactly the same.

Let us know if there are any odd situations you’d like us to explore with the cameras and we’ll see what we can do!

The battery on both devices is very, very similar. Thus far we’ve seen no significant difference in battery life be it the Galaxy S6 Edge or non-edge, regardless of display space. 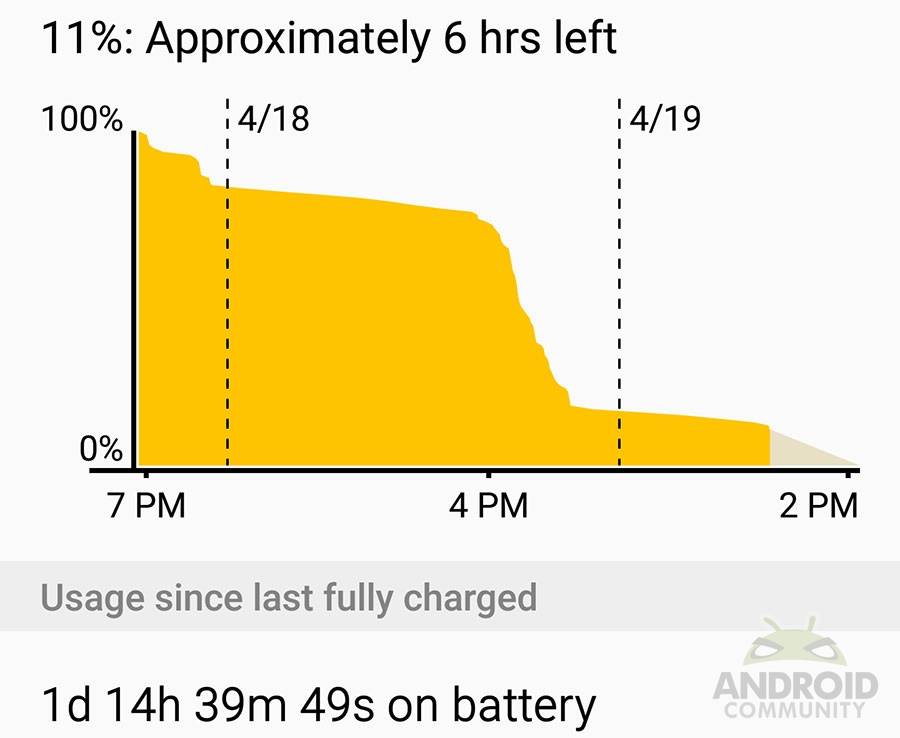 These devices do not present a battery life that’s significantly different from the Samsung Galaxy S5. While they do have some major battery-saving modes and abilities, in standard mode they’ll last you one day. Right around 10 hours, if you play your cards right.

Playing lots of games and running the device’s camera to capture video can lead to serious drains on battery. The same is true of video editing. Keep editing for home rather than in the field, and you’ll be good to go for a full workday.

Benchmarks are a joke, at this point in history – but if you’d really, truly love for us to perform these testers of how well the device takes a test, by all means, let us know.

Let us know which benchmarks you’d like us to run, and link us up – we’ll do whatever you please.

UPDATE: We’ve had some requests! Have a peek below and dive in with as much faith as can muster for these tests!

Until then, keep this in mind: the Samsung Galaxy S6 Edge just displaced the HTC One M8 as my daily driver, the device that I’ve used for a full year non-stop before this month. The camera is so much of a leap forward that I could not resist. 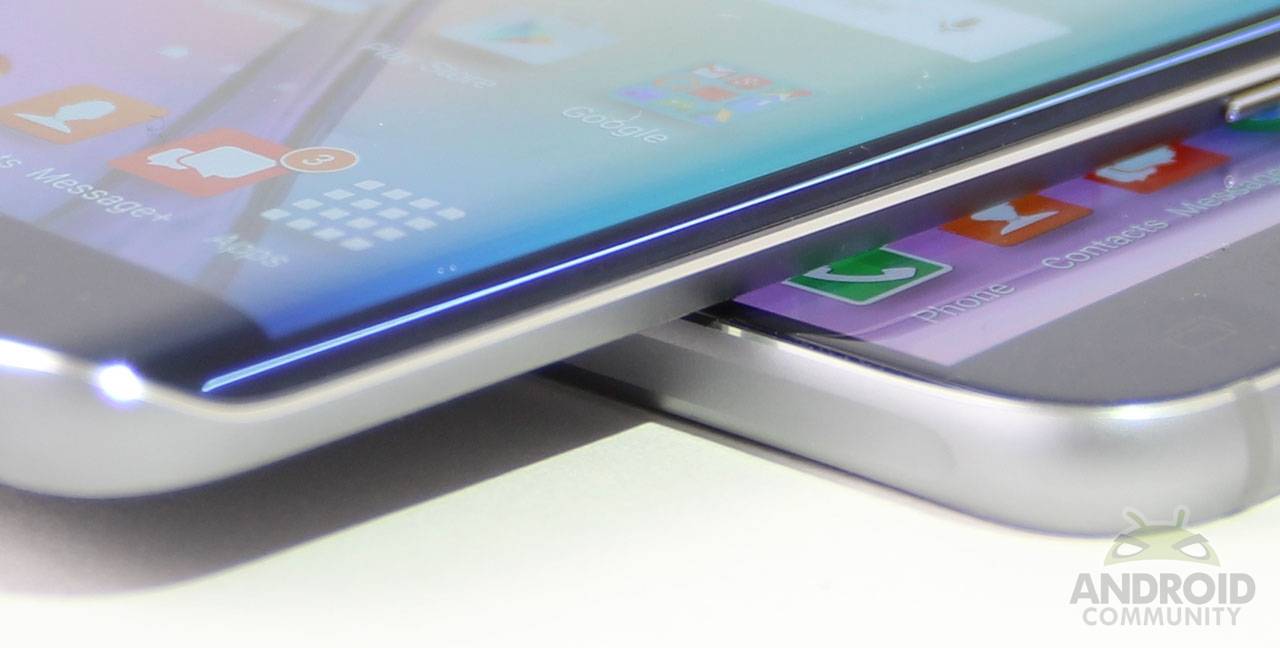 The software is great, everything feels very smooth, and this device is enough of an oddity that I can’t resist its charm.