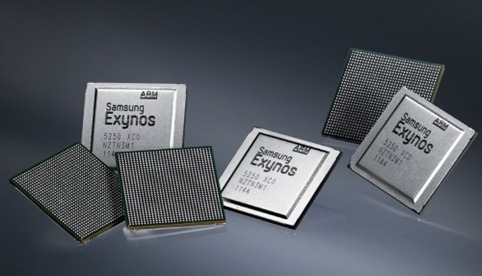 Like it or not, Apple‘s shiny new 64-bit mobile processor has got everyone talking for or against it and even long-time rival Samsung is apparently ready to jump into the wagon. This latest rumor reveals that the company will be showcasing a 64-bit processor in its upcoming Galaxy S5 smartphone, but will be putting in a slight twist.

That twist comes from the manufacturing process. Majority of Samsung’s and other major manufacturers’ chips use a 28nm (nanometer) process, referring to the size of the die or the block of semiconducting material on which the chip is made. According to normal die shrinking conventions, the next smaller die size would be 20nm. However, it seems that the company is somewhat desperate to get an edge over its competitors and will instead be skipping a stage and jumping right down to a 14nm FinFET process.

This process will produce Samsung’s next series of mobile processors, for now dubbed as the Exynos 6 series. Naturally, as the trend goes, Exynos 6 will be 64-bit capable. But more than that, it will be implementing an ARM big.LITTLE architecture, similar to that of announced the Exynos 5 5420 chips. The difference is that Exynos 6 will be sporting a combination of 64-bit ARM chips, the low-power Cortex-A53 and the more powerful Cortex-A57, instead of the usual Cortex-A7/A15 combinations.

Presuming the Exynos 6 news is true, whether or not the Samsung Galaxy S5 will sport such a chip will depend on the timing, not to mention the veracity of rumors. Samsung is said to start production of the Exynos 6 5430 chips late this year and is expected to market it early next year. On the other hand, the Galaxy S5 is rumored to be unveiled at the Mobile World Congress 2014 in February, which could mean that the smartphone might be making a pass on these 64-bit processors.