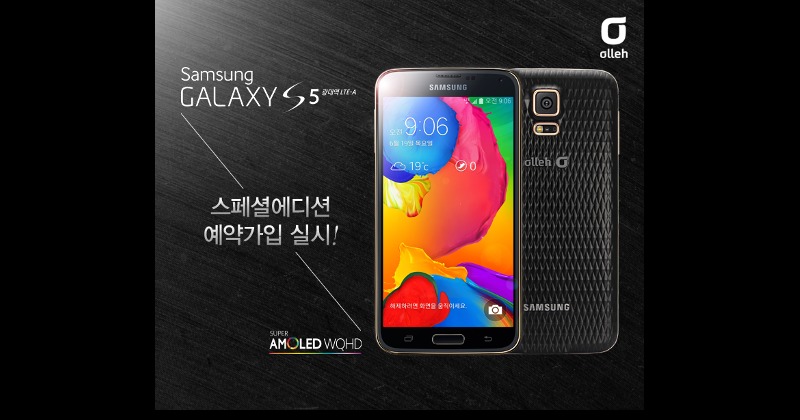 If the perforated, notoriously teased as “band aid”, back cover of the Galaxy S5 isn’t your thing, then you might be able to get that changed. But only if you’re in Korea buying a Galaxy S5 LTE-A from carrier KT, as this new limited Special Edition promo requires.

Last week, Samsung unveiled the Galaxy S5 LTE-A bearing specs that were reminiscent of the Galaxy F/S5 Prime rumors. However, the Korean manufacturer disappointed many fans by limiting the device’s availability to the Korean market. Perhaps to add insult to injury, Samsung has partnered with Korean carrier KT to introduce a very limited special edition that sort of fixes one of the most ridiculed design decision for Samsung’s flagship.

This KT exclusive model swaps out the dimpled back cover in exchange for one that has diamond-shaped patterns. It still looks a bit peculiar, especially from a distance, but not as much as the normal Galaxy S5. Especially when you consider that there are only two color options of black and white available for this special edition, further distancing the smartphone from the band-aid association. Other than that, you get the same premium features revealed in the Galaxy S5 LTE-A, such as the 5.1-inch WQHD screen, Qualcomm Snapdragon 805, and 3 GB of RAM.

KT is also offering something special for early buyers of this special edition. The first few who will avail of this promo will get a 9,900 KRW discount off their purchase of the Samsung Gear Fit. That amounts to almost $10 off Samsung’s smart fitness band. On the other hand, the Galaxy S5 LTE-A Special Edition itself will cost 940,500 KRW, roughly $925 converted.