If the accompanying report is correct, what we’re looking at is the frame for the Samsung Galaxy S5. While that’s not necessarily a big deal — it’s just a frame, not the finished product — it does signify a departure for Samsung. A metal frame would be a big change front he way Samsung has traditionally built devices.

Samsung has proudly used plastic for just about every inch of their device structure for quite some time, evenly defiantly stating their customers prefer it. That choice often makes the handset feel cheap, and uneasy to hold. It keeps weight down, but compromises the structure and rigidity of the phone. A metal frame would help in those regards, but that doesn’t mean the device will look any different.

Being cautiously optimistic, we’ll pause to remember this is simply a frame, and one that’s said to be for the Galaxy S5. That doesn’t mean it is, and a frame also doesn’t mean the entire device will be cased in anything other than plastic. From the looks of it, this will simply serve as a new frame, and we’ll continue to get a plastic Galaxy device. For what it’s worth, though, this one has all the bells and whistles; the camera cutout is right, and the Micro USB and antenna jack are there. 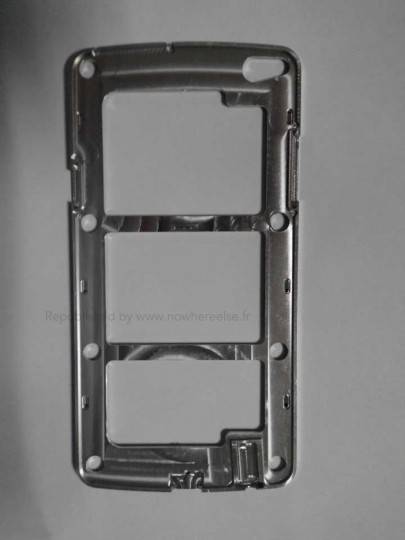 If it were going to be full-on metal, we’d assume it would be a unibody design like the HTC One. Leaked images prior to launch showed the HTC One with a complete unibody, not just the frame. Samsung could still surprise, offering a removable metal backing, but that’s not likely. The clips which hold backs onto devices are typically plastic, and a metal battery door would be too much for those clips. Like always, we’ll reserve judgement until the time comes. For now, it’s just grist for the mill.