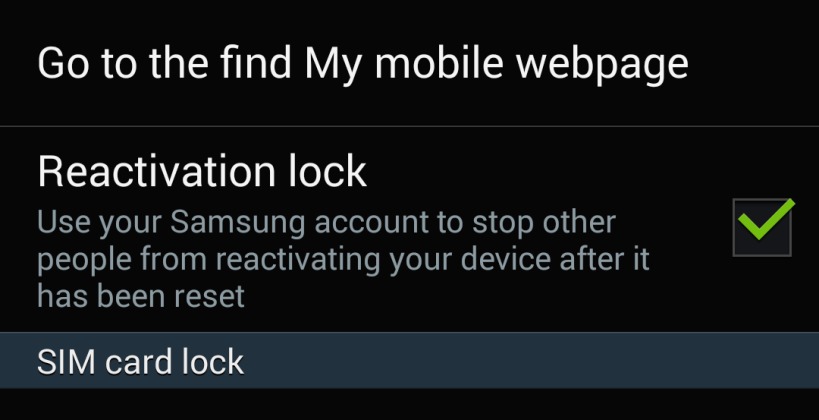 San Francisco District Attorney George Gascon and New York Attorney General Eric Schneiderman made an announcement today that sounds both strange and hopeful. Samsung, Verizon, and US Cellular have agreed to ship the Galaxy S5 with Find My Mobile and Reactivation Lock features preinstalled which can then be activated for free.

These two features are not exactly new and can be found installed on international models of the Galaxy Note 3. Find My Mobile offers the same features as the Android Device Manager launched last year, letting you locate your device from a browser-based interface. Reactivation lock, once enabled, will require Samsung account credentials before a device can be activated after a reset, ensuring that only the legitimate owner is allowed to reactivate it.

What makes the announcement notable, then, is the fact that Samsung and two US carriers will be working together to make it happen. The actors in this news have all met before in less ideal circumstances revolving around the so-called “kill switch” plan. The feature to remotely brick a device in case of theft was supposedly already available on some devices, carriers, as part of the larger CTIA group, have demanded they be removed. This move was questioned by the aforementioned law officials, accusing the CTIA and carriers of putting profits ahead of the safety of its subscribers. The debate around the merits and flaws of the kill switch plan continues, but for now a middle ground has been found.

The two features are definitely no kill switch, but they at least provide some level of security and, hopefully, peace of mind. More than the features themselves, it is the cooperation between manufacturer and carrier that is hoped to send a strong message to other parties about the issue. Of course, just as with other features like it, Find My Mobile and Reactivation lock are both opt-in, meaning they are disabled by default and buried beneath menus, practically negating their purpose. Hopefully, Samsung, Verizon, and US Cellular will be spreading the word about the feature so that they become common knowledge.