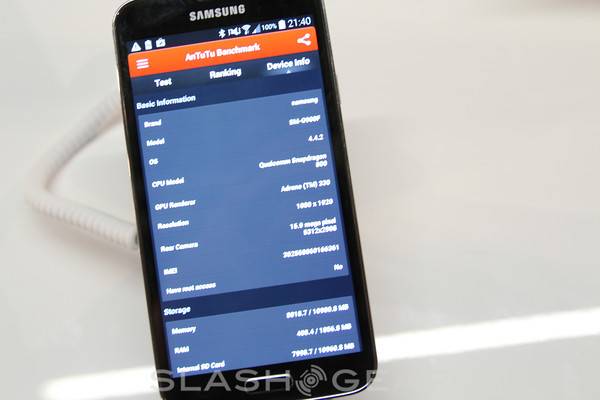 Benchmarks may be suspect to some, but they can reveal quite a bit. Aside from performance, of which the validity has been called into question many times, we can learn a lot about the hardware makeup of a handset. At MWC, we ran a quick benchmark test on the new Galaxy S5. The results may surprise you.

The first thing that jumped out at us was the device on display was running a Qualcomm Snapdragon 800 SoC, not Exynos. The Adreno 330 GPU is also there, which was no real surprise, but confirmation is always nice. The rest of the hardware specs are just as we have been told, so no real surprises for us outside of the Exynos/Snapdragon thing, but that could change depending on market availability and such.

Cracking open an old chestnut, we get to the results. The Samsung Galaxy S5, according to the benchmark test we ran, is the fastest device around. It’s even faster than the already suspicious Note 3 from Samsung. With the updated processor, it’s also a good deal faster than the S4, but that’s to be expected. We won’t draw any conclusions here. We’re happy to simply leave the benchmarks above, letting them speak for themselves.

We like Qualcomm’s Snapdragon processors, and they are fairly ubiquitous, but we’re not going to count Exynos out just yet. The Qualcomm variety could just be for certain markets, with Exynos making an appearance elsewhere. We are still in Barcelona, binging you all the MWC coverage you can handle! Be sure to bookmark our MWC tag for quick and easy access to all things Android and MWC 2014.

[Update] A new statement release by Qualcomm brings mention of the Snapdragon 801 with Adreno 330 GPU.