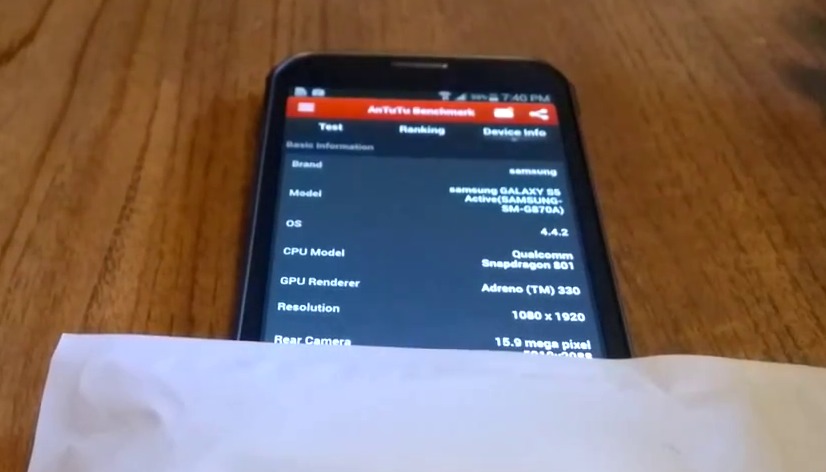 Here comes another video detailing the Galaxy S5 Active and practically removing any mystery left about the device. A series of benchmark tests now reveal just what exactly makes this rugged version of Samsung‘s flagship tick.

Here we get a confirmation of the device’s display resolution, which is noted to be at 1920×1080 pixels. Definitely not the 2K that was first theorized, though earlier leaked videos comparing it with the Galaxy S5 showed some differences in quality. The display is believed to also be using Super AMOLED technology just like the flagship. The rear camera is measured to be 15.9 megapixels, practically 16, the same as the Galaxy S5 again. Also similar is the Android 4.4.2 version. An earlier leaked pre-production model of the Galaxy S5 Prime showed that that smartphone will be arriving with an even higher Android 4.4.3.

Going inside deeper, we see the beating heart of the smartphone: the Qualcomm Snapdragon 801 running at 2.5 GHz on each of its four cores. Geekbench shows 2 GB of RAM on the device, again exactly like the Galaxy S5. For graphics, the device of course comes with the Adreno 330 GPU that is paired with every Snapdragon 801. The Galaxy S5 Active is also equipped with a whole host of sensors. We already saw the heart rate monitor earlier, but apparently this Active smartphone also has a barometer hidden inside.

From these flurry of videos, we can see that the Galaxy S5 Active is practically the same as the Galaxy S5, and not the somewhat underpowered version that the Galaxy S4 Active was compared to the Galaxy S 4 itself. The only difference, so far, lies on the outside, with a sturdy metal edge and some extra rubber protection. Depending on Samsung’s price tag, this Active variant could definitely be an option for those who would rather trade the Galaxy S5’s supposedly classy look for an extra layer of ruggedness.