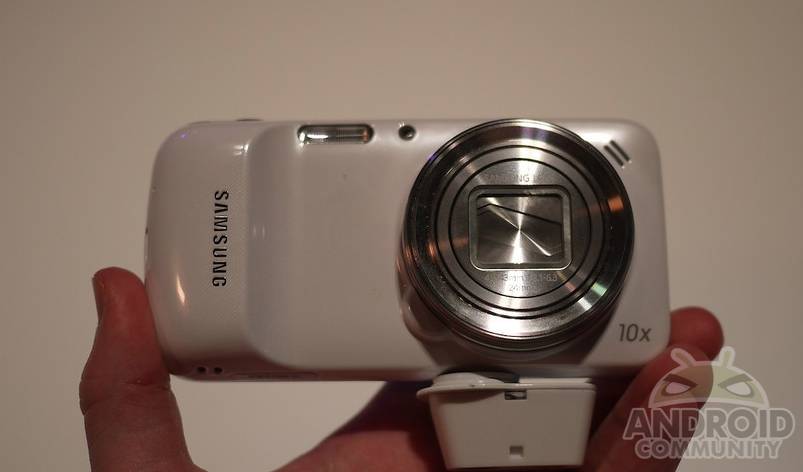 Here in London we’ve got our hands on the Samsung Galaxy S4 Zoom, the company’s latest effort in crossover machines between the point-and-shoot camera and their hero smartphone, the Galaxy S 4. This device is certainly a considerable bit thicker than the smartphone already on the market, yet it’s not quite as large as the original Samsung Galaxy Camera. It’s there that this machine finds its half-way point.

This device works with a 16-megapixel sensor up front with a physical camera shutter button up top. If you look at this device from its lens side – otherwise known as the back if you’re thinking about this device as a camera phone – you’ll think you’re looking at a compact shooter. You’d never know the difference. From the display side of this device, on the other hand, it’s essentially a Galaxy smartphone – with a big hump on its back. A 4.3-inch Galaxy Smartphone, that runs Android 4.2.2 Jelly Bean.

That’s not to say that this machine is uncomfortable to use. We’ll gladly switch out the Galaxy Camera for this machine, especially since it’s going to be working with the next generation of software advances, including Galaxy S 4 cross-over wireless sharing, and all the 4.2.2 Jelly Bean enhancements from TouchWiz. It’s also slightly smaller, promises better battery life, and will obviously double as a phone. 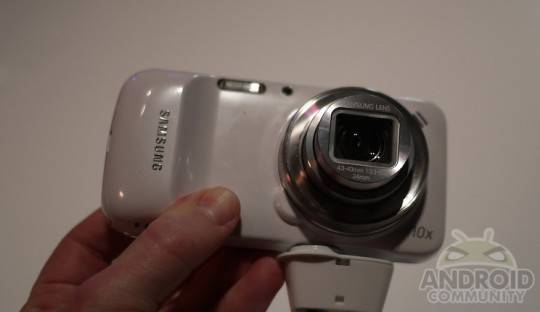 The Galaxy S4 Zoom works with a 4.3-inch qHD 540 x 960 display, and the same odd 1.5 GHz dual-core with 1.5GB of RAM and 16GB of storage. Bluetooth 4.0 and NFC, an accelerometer, digital compass, A-GPS, and GLONASS as well. The panel on the shutter button side of the machine holds a removable 2,330 mAh battery pack – replaceable and interchangeable, too.

Inside this device will be working with Android 4.2 Jelly Bean with TouchWiz over the top, while the whole system appears to be able to work with essentially the same camera features as the Samsung Galaxy S 4. Smart Mode, Drama Shot, and Action Freeze are here, as is Photo Suggest for this device’s gallery. 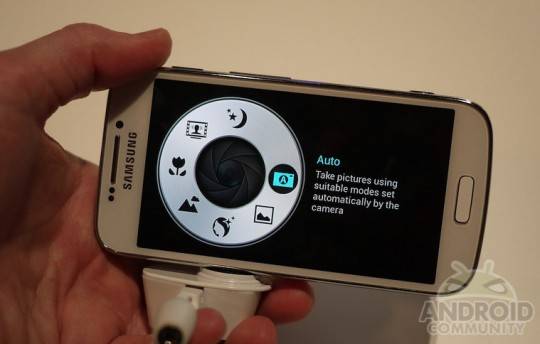 Up front you’ll also find a feature new to the Galaxy Camera line: “Samsung Zoom Ring”. It’s just a physical control for your optical zoom, on the surface, but if used when you’re on a phone call, camera mode will be activated and a photo snapped is a photo sent – through MMS in this case. Pretty neat right. Overall the device feels decent, but we’re sad it doesn’t have a 720p HD display. For those who thought the Galaxy Camera was too expensive this could be the perfect fit to marry both a Galaxy Camera and Galaxy smartphone, but the phone specs aren’t quite what most want in today’s world. However, it will certainly do just fine.

Have a peek at our up-close and personal look at this machine above and below. Samsung was nice enough to show us a few flip cover cases and accessories (wrist bands) for the Galaxy S4 Zoom. And while we’re here we took a moment to snap some S4 Zoom vs Galaxy Camera pictures too. Take a peek below. As soon as we hear pricing we’ll be sure and update, we have a feeling this could be another one of those AT&T exclusives.

-– This hands-on was contributed to by Cory Gunther