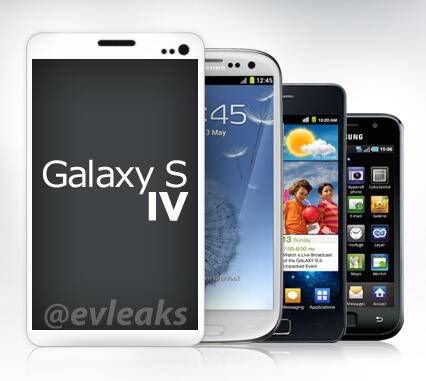 The Samsung Galaxy S4 has been in the news a lot the past few days, and this evening we’re getting even more details. After some benchmarks were shown off earlier today, a new leak has been revealed from the reliable and highly accurate @evleaks showing what appears to be a fat Samsung Galaxy S4 smartphone. These are just renders, and nothing fancy at that, but still worth taking a look at.

We’re really not sure what to think about what we have here, but coming from someone like @evleaks that has been extremely accurate in almost all of his previous leaks – which there’s a lot of – we’re going to go ahead and assume this is real. They aren’t anything fancy, and the specs are all but confirmed, but check it out. Oh and don’t forget to notice this doesn’t have a dedicated home button either, but that’s pretty doubtful at this point. Samsung’s made a point to keep that alive.

Update: These were just mockups by the popular online retailer Expansys. Sadness!

What we’re looking at above appears to be a rather early render from someone at Samsung, showing the evolution of the Samsung Galaxy S smartphone. With the image showing the original, all the way to the upcoming S4 that will be announced on March 14th in New York City. The Galaxy S III has a 4.8-inch screen, and the new Galaxy S4 will only be slightly bigger coming in at 4.99-inches – but offer a full 1920x1080p HD resolution. Oddly the render shows a rather large device next to the current Galaxy S III.

Then what you see above, is another look at what we’re assuming will be the specs. Just about everything has leaked at this point and the only real mystery is the final regional specs, and the design. We saw some cases last week suggesting this squared off design instead of the curved edges of the GS3, so this matches previous reports. This new set of leaks also confirms the suggestion of a 64GB model will be offered from Samsung.

For everything we’ve seen thus far of the upcoming and highly anticipated Samsung Galaxy S4 hit the links below. Including some benchmark results that surfaced this weekend. We’ll report back when we hear any additional details on these leaks, and stay tuned for the real event which we’ll be at live!

[via @evleaks; via Expansys]