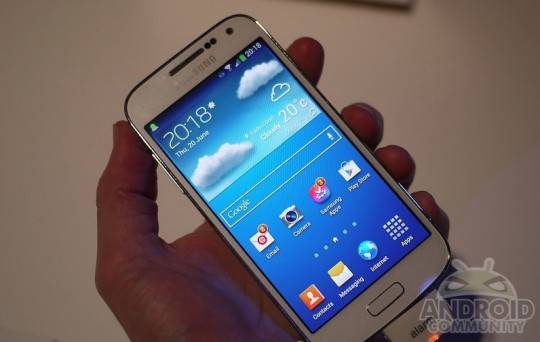 Samsung has officially announced the US availability of the Galaxy S4 mini. The handset will be coming to a variety of carriers and while we have yet to see any specific launch dates, Samsung has said the Galaxy S4 mini will be arriving in November. Basically, we now look towards the carriers for those details. The handset is heading to AT&T, Sprint, Verizon Wireless and US Cellular.

Each of the carriers will have the handset available in Black Mist and White Frost and along with the phone itself, there will also be some accessories available. Samsung will have the S-View Flip Cover which offers a clear window that allows you to view notifications without having to open the cover. The S-View Flip Cover will ship in black and white to match the phone, as well as light blue and pink.

There was also mention of Galaxy Gear smartwatch support. Samsung has said the Galaxy S4 mini will get a software update “soon after launch” that will bring compatibility. Of course, the Galaxy Gear still be a separate purchase. And as we have already seen, that means a purchase price of $299.

In terms of the phone itself, the Galaxy S4 mini sports a 4.3-inch (960 x 540) qHD Super AMOLED display, dual-core 1.7GHz processor, 1.5GB of RAM, 1900 mAh battery, 16GB of internal storage and a microSD card slot with support for an additional 64GB. The handset will be running Android 4.2.2 Jelly Bean at launch, which will come along with the TouchWiz user interface.

Otherwise, the Galaxy S4 mini measures in at 4.9 x 2.4 inches and will also be sporting an 8 megapixel rear-facing camera with features to include Beauty Shot, Best Photo, Sound & Shot and Panorama. That all being said, we spent a bit of hands-on time with the Galaxy S4 mini back and June and along with the written post, we also had a video which can be seen below.