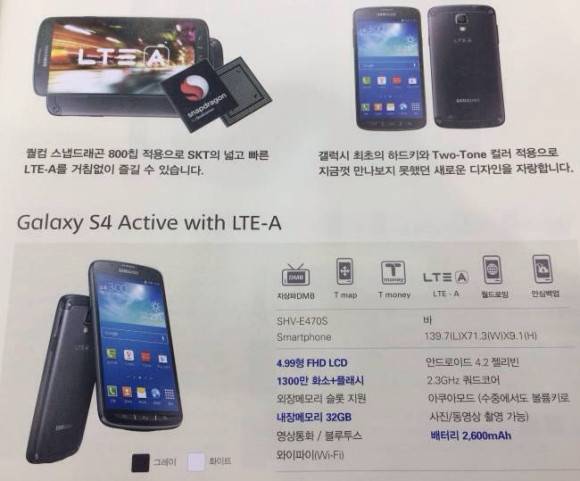 When Samsung makes an “active” version of their Galaxy S devices, we expect something a little more rugged. By nature, it lends itself to being tossed around and dunked in water. We don’t really expect a spec upgrade, but that’s what we might be getting with the newer Galaxy S4 Active.

We are cautiously optimistic we’ll see the new S4 Active here stateside, since this news is for the Korean variant. It does up the ante with a Snapdragon 800 processor, which has our attention. It will also support Korea’s LTE-A network, and come with an Adreno 330 GPU. It gets a camera upgrade, too, opting for the 13MP variety rather than the 8MP on the original.

Oddly, this is also an update for the active model, which already exists. We don’t know if this is a Korea-only model, or just another Samsung variant of a device that already exists. The original S4 active was simply a rough-and-tumble version of the Galaxy S4, while this one makes a few interesting upgrades. Either way, it’s a top-of-the-line handset in regard to specs, and incredibly handy with the tough casing.

We’d like to think this is just Samsung’s way of testing a top-end device while preparing a Galaxy S5 in-house, but that’s just fun speculation. Considering the rumblings about the Galaxy S5, it seems like these could be nearly final specs. The camera on the S5 will probably be around 16MP, and the housing will obviously be different, but the rest could be very, very similar to this device.