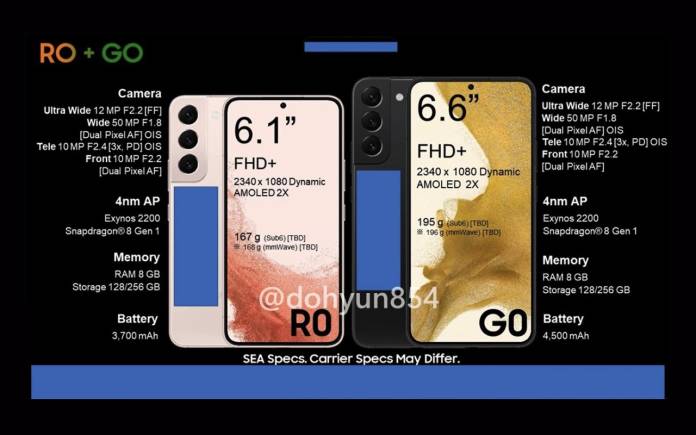 It’s going to be an exciting February for the whole Android community. The Mobile World Congress will be held. Samsung is confirmed to introduce new premium flagship devices starting with the Galaxy S22 series. New Galaxy Tab S8 series tablets are also believed to be announced. The Unpacked event is happening in less than two weeks. That means another two weeks of rumors, leaks, and speculations. We already have a clear idea about the design, features, and specs of all three Galaxy S22 phones but expect more will be leaked until the official announcement.

Our source has leaked a bunch of teasers. No, they’re not just teasers. The images have almost everything we need to know about the upcoming smartphones and flagship tablets.

The set of images shows us the new Android smartphones and tablets. We have probably seen some of these images and details which tells us Samsung is ready to reveal the devices.

The Galaxy S22 series is known as “Rainbow”. There will be three variants: the vanilla Galaxy S22 (codename: R0), Galaxy S22+ (G0), and the Galaxy S22 Ultra (B0). As for the Galaxy Tab S8 series, the tablets will also support 45W charging just like the Galaxy S22. There’s one caveat: the 45W power adapter is sold separately.

Here are some details listed. The Galaxy S22 with a 6.1-inch screen will come with three cameras: 12MP ultra wide + 50MP wide with dual pixel + 10MP telephoto. The selfie camera will be 10MP. The phone will run on Exynos 2200 or Snapdragon 8 Gen 1 processor and a 3700mAh battery plus 8GB RAM and 128GB or 256GB onboard storage.