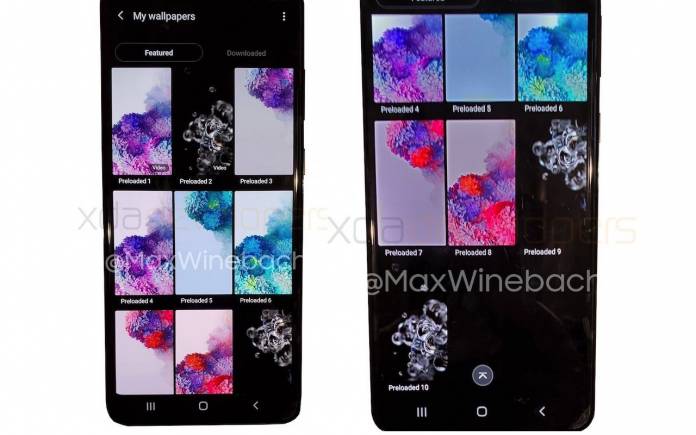 Samsung is making us believe it is ready for the Unpacked 2020 event. February 11 can’t come soon enough as we want all the details we know confirmed. The Galaxy S20 will arrive in three variants: the Galaxy S20, Galaxy S20+, and the Galaxy S20 Ultra. The premium flagship series will also come with the next-gen foldable phone–the Galaxy Z Flip which we’ve been calling the Galaxy Fold 2. A lot of information has been shared and leaked over the past few months already.

While image renders and 360-degree videos abound, this is the first time we’re seeing and learning about Samsung Galaxy S20 Wallpapers. They’ve surfaced ahead of launch, thanks to our source from XDA. Eight wallpapers are available in the picture gallery below.

The post included a live image of the Galaxy S20 showing the preloaded wallpapers. There are four obvious colors which could mean they match the colors of the Galaxy S20 phones. If that is the case, we can expect a black, white (or is that purple?), blue, or pink Galaxy S20s.

Most wallpapers show a tree with leaves that look like feathers in different colors. The other one appears to be bubbles in water against a black backdrop. The resolution of the images is 3200 x 3200.

As with all wallpapers, the images can be used for lockscreen or home screen background. Two animated videos have been provided as well which can be used as lock screen animation.

This early release allows any Samsung or non-Samsung phone owners to use the wallpapers. We personally like the colors especially the blue image that is soothing to the eyes.