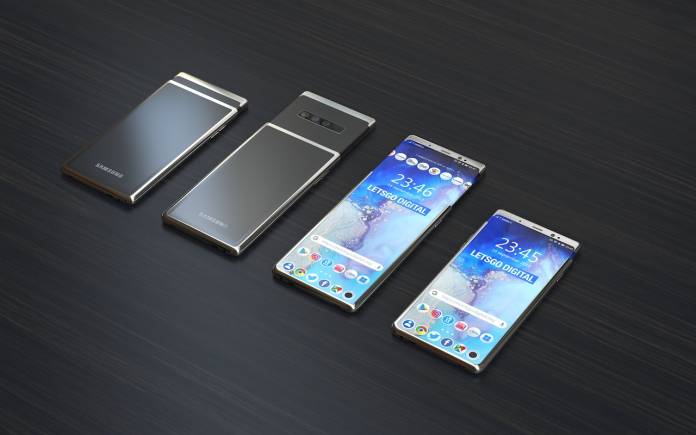 The Samsung Galaxy Fold has already hit the market only a few weeks after the Galaxy Note 10 series’ launch. We already knew the next big thing from the South Korean tech giant is the Galaxy S11 which we’ve been saying would come in three variants: the regular Galaxy S11, Galaxy S11e, and Galaxy S11 Plus. Just yesterday, we mentioned there is a possibility Samsung will combine the S and Note series. The next-gen Galaxy S11 will feature an updated design plus some other innovations.

We’re looking at a slider design. It’s not really new but a new thing for Samsung. We have a few image renders here.

The slider phone design is said to increase screen size. Some patents were sighted on the USPTO (United States Patent and Trademark Office). The images above are mere renders. We see a retractable scene. Like the Vivo NEX 3, there is a waterfall display.

The Samsung Galaxy S11 Plus may also feature a narrow metal frame border and rounded display. Sliding the phone will bring a bigger display. It can be useful when you scroll through websites or watch a video or even a game.

You can say this is another smartphone with an edge display. It’s common for premium Samsung Galaxy phones but there is the waterfall effect on the upper part. The rear camera (one) can be used when you pull the phone out. They are hidden within the housing so they can be protected from dirt.

The speaker and selfie shooters are in the top part of the screen border. The single-camera comes with a flash. Of course, we’re taking things with a grain of salt because they are only image renders. We’re also expecting multiple cameras as in the previous models.