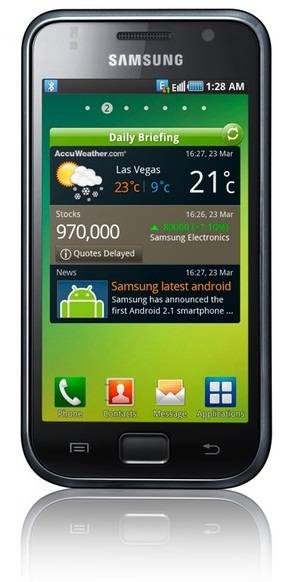 The Samsung Galaxy S has created a lot of buzz around the web. There’s still no official word on when this device will hit the market here in the US. Initial reports have the “Superphone” slated for release on all the major carriers here. This promo video gives you a few things to look forward to if you decide to purchase one.

The video highlights the different ways you can use this device. At home there’s the usual alarm clock, the Galaxy S will have a “smart alarm” feature and of course widgets on your desktop that updates with the latest news and weather. On the road Google Maps is featured and SWYPE makes an appetence as well for all you heavy SMS users.

Joining the 4.0” Super AMOLED screen will be 16GB’s of onboard storage. This phone will also have the ability to be used as a remote for you television. HD video recording is also highlighted and my favorite part of this promo video is the ability to share things via DLNA. For those of you that don’t know, most modern Samsung televisions use DLNA to share video, picture and other files either wireless or wired on your home network. This device is shaping up to be quite a nice piece of work.