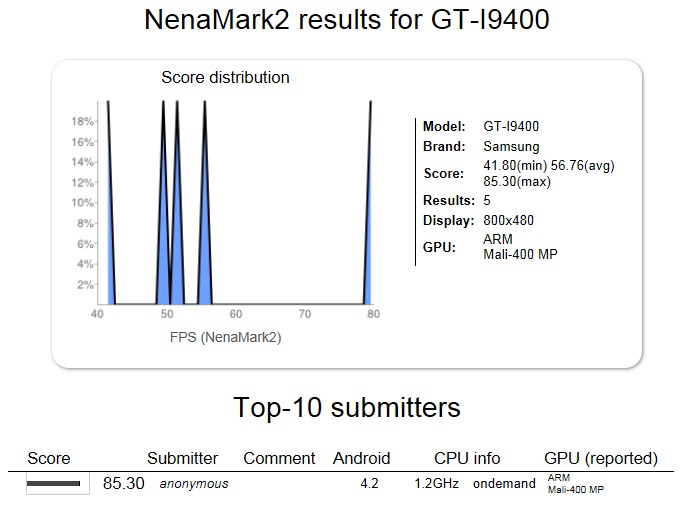 We’ve had no shortage of Samsung Galaxy S IV rumors as we barrel toward 2013, and today we’ve got another one to toss on the pile. Sam Mobile has uncovered NenaMark 2 benchmark results for the Samsung GT-I9400, which is believed to be the next generation Galaxy S handset. That’s certainly exciting, but the problem is that the results show some very disappointing specs for a flagship phone releasing in 2013.

Specifically speaking, the results say that the GT-I9400 uses a 1.2GHz processor and a features a screen that displays at a paltry 480×800 resolution. Add a ARM Mali-400 MP GPU to those components and you’ve got one disappointing list of specs. However, there is reason to hope, as Sam Mobile points out that this almost certainly isn’t the final hardware configuration of the Galaxy S IV.

After all, Samsung tested firmware for the Galaxy S III with less-than-stellar specs, so that’s probably what’s going on here. In any case, no one is actually expecting Samsung to launch its flagship phone with a WVGA display and only a dual-core processor. The company is going to pull out all the stops for the Galaxy S IV, so you can bet that it will stay away from low-end components like these.

For the record, recent rumors peg the Galaxy S IV with a 5-inch display at 1920×1080 resolution, a Samsung Exynos 5450 CPU, a 13MP camera, and Android 4.2. While these benchmark results don’t really tell us anything of value about the phone’s technical specifications, it does let us know that Samsung is in the testing stages, which means that we might be on track for a May 2013 launch. Stay tuned.