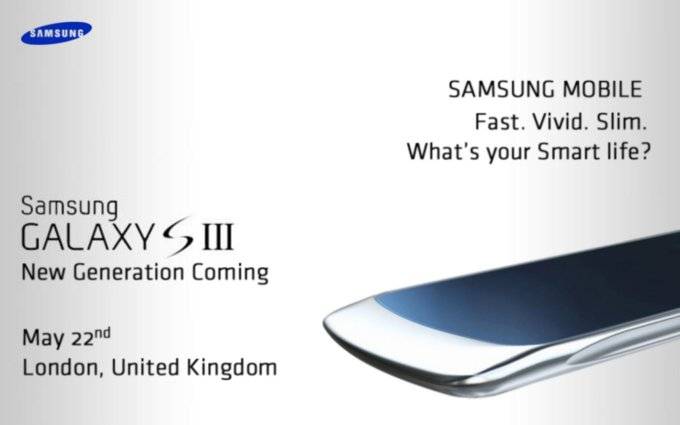 The Samsung Galaxy S III is one of the most anticipated smartphones of the year, that goes without question. We’ve seen various leaks and tons of fakes claiming to be the real deal. While this could very well be as fake as the rest it at least appears to possibly be real. Being spotted in a press invite and listing for the second time now, May 22nd for the unveiling.

Now obviously the image doesn’t reveal much as far as design, but most press invites don’t. It’s an interesting design that is for sure, and that’s only if it’s real to begin with. Talk about curves right? Uncovered by the folks at Phandroid this could possibly be the real deal, but it’s doubtful.

First off press invites never go out two months in advanced, never. Then looking at the design while I could see this being Samsung’s next flagship as they try to differentiate themselves from the competition, and the Galaxy S II, this just seems a little much. At the same time the Galaxy Nexus leaks showed us a crazy curved design that was exaggerated too so the same situation could apply here. The slit up the side seems odd and uncomfortable — and if it’s for a stylus or S-pen I’ll be angry.

This is a very interesting leak that is for sure. Either someone made a clever and believable press invite image, or this is indeed the real deal. We’ve seen May 22nd tossed around more than once too, so we should take that into consideration too. What do you guys think? Real deal or too crazy to be legit? Sound off below.