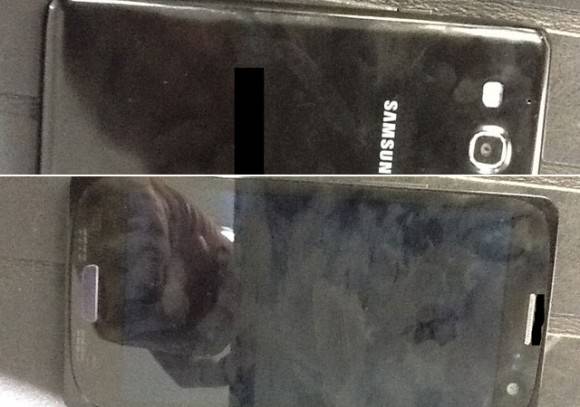 Who’s ready for some juicy and possibly real pictures of the hotly anticipated Samsung Galaxy S III flagship smartphone. We’ve seen more leaks and heard more rumors than I’d care to share, but today’s picture could be the first real images of the new phone. Taken by Mr Blurrycam himself (with an iPad no less) we’d love a clear shot but will take what we can get. Check it out!

Apparently these pictures were snapped up by the folks at Gizmodo and their sources are quite confident that this is in fact real, and what you see is the new Samsung Galaxy S III. Now whether or not that square design around the display is there to stay, or just acting as a disguise like we mentioned last week is still unknown. The official announcement where we’ll “meet the next Galaxy” is set for May 3rd so the wait is almost over, but this could have spoiled the unveil.

According to the leakster the new Galaxy S III will be thinner than the SGSII, but will weigh a little more thanks to an impressive 12 megapixel rear camera, 2 megapixel front camera, and the quad-core Exynos processor under the hood. The back of the phone in these pictures looks pretty plastic if you ask me, and we’ve all been speculating about a ceramic design for months. One important thing is we are hearing this device pictured has a model number of Samsung GT-I9300. A device we’ve seen leaks of with an odd resolution, and have reported as NOT being the Galaxy S III. So this could just be an elaborate cover by Samsung, or possibly the Galaxy M instead.

Obviously we still have tons of questions, as does everyone else I’m sure. Stay tuned for more details as we dig for more, and expect tons of hands-on pictures and video from the event May 3rd as we’ll be there live.

[via SlashGear] — Thanks Kote