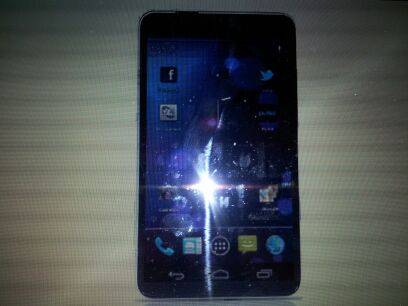 Well another week has passed and we have yet another leaked photo of the prized Galaxy S III from Samsung. Only this time things are looking slightly more realistic than the others. Previous leaks contained press renders, or mock up shots but this appears to be an actual piece of hardware, not just a rendered photo. Some juicy specs were also detailed so read on for all the info.

This latest piece of Android news comes from some sources at Reddit, claiming his friend has a respectable job with Samsung and just sent over an official picture of the new Galaxy S III along with some details that we’ve not yet heard from other rumors. First off the picture is iffy, the flash ruins any chance of giving it an honest look, and it could just be the Galaxy S II photo-shopped with Android 4.0 ICS, then someone took a picture of their monitor. Certain aspects of it does look legit though so let us know what you think.

According to the leakster this will be powered by Samsung’s latest quad-core Exynos 4412 processor but no speeds were mentioned, 2GB of RAM, 12 megapixel camera, and a 4.7-inch Super AMOLED HD screen that looks gorgeous. We also get a 2250 mAh battery and a completely smooth back, no hump like Samsung has been known for in almost every smartphone. Here is where things get interesting. The picture has stock Android 4.0 Ice Cream Sandwich, no TouchWiz like we all thought. This pictures source mentioned that Samsung might give users two launcher options. One to run completely stock Android ICS, and a quick settings change will allow users that like Samsung’s small OS changes in the TouchWiz user interface to be enabled if they choose. This is something I’ve been wishing HTC would do for years now.

Most likely this photo is a fake. The flash and the fact that it’s on a computer, then someone took a picture of the monitor isn’t helping its case either. We can’t really confirm anything and the small picture ruined by the flash makes this just one more of many leaks. The extremely small bezel sure looks impressive and hopefully the Galaxy S III looks something similar to this. We’ll see because surely Samsung will be announcing something here soon.