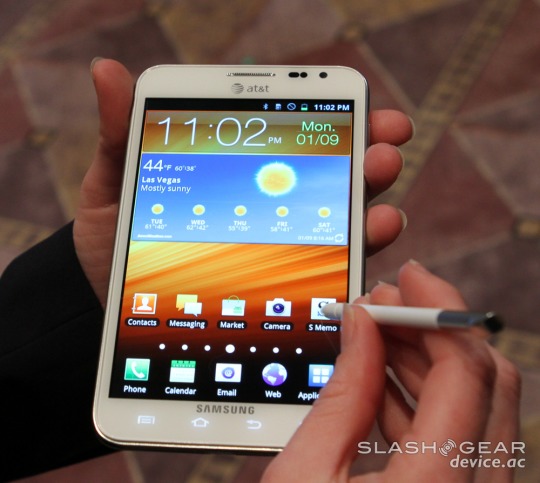 Along with the latest rumors coming out today, we’ve heard plenty about the highly anticipated Samsung Galaxy S III. We don’t expect these to slow down anytime soon either. Latest reports from MobileCowboys are giving us some interesting details — including an early March release for the Galaxy S III and even a Galaxy Note S coming later. More details after the break.

First off I want to start with the Galaxy Note S. According to MobileCowboy Samsung’s aiming to release a successor to the original Note later this year around the holiday season and call it the Note S. Obviously I’m taking this with a huge grain of salt — like a massive 5.3″ grain of salt. Although with the S in all their other naming schemes it sort of makes sense, I just don’t see it happening. These same leaks also claim a Galaxy S II Plus is on the way with a little refresh but no other details were available.

Next, the important stuff, the Galaxy S III. According to the leakster Samsung will in fact be announcing the SGSIII at Mobile World Congress and be followed with a mid-March international release. They go as far as to say it will be for sale in their home country of Turkey come March 13th. Others like Apple launch devices within weeks of the announcement — so why not Samsung.

Previous reports (linked below) suggest Samsung has delayed the launch and will not be showing the SGSIII at Mobile World Congress. Instead they’ll aim for a bigger stage, doing big advertising and release it around the Summer Olympics. That actually makes sense with the recent announcement of their huge million dollar 90 second Super Bowl commercial coming this Sunday. Either way we’ll continue to monitor the rumors and details until we hear something more concrete.