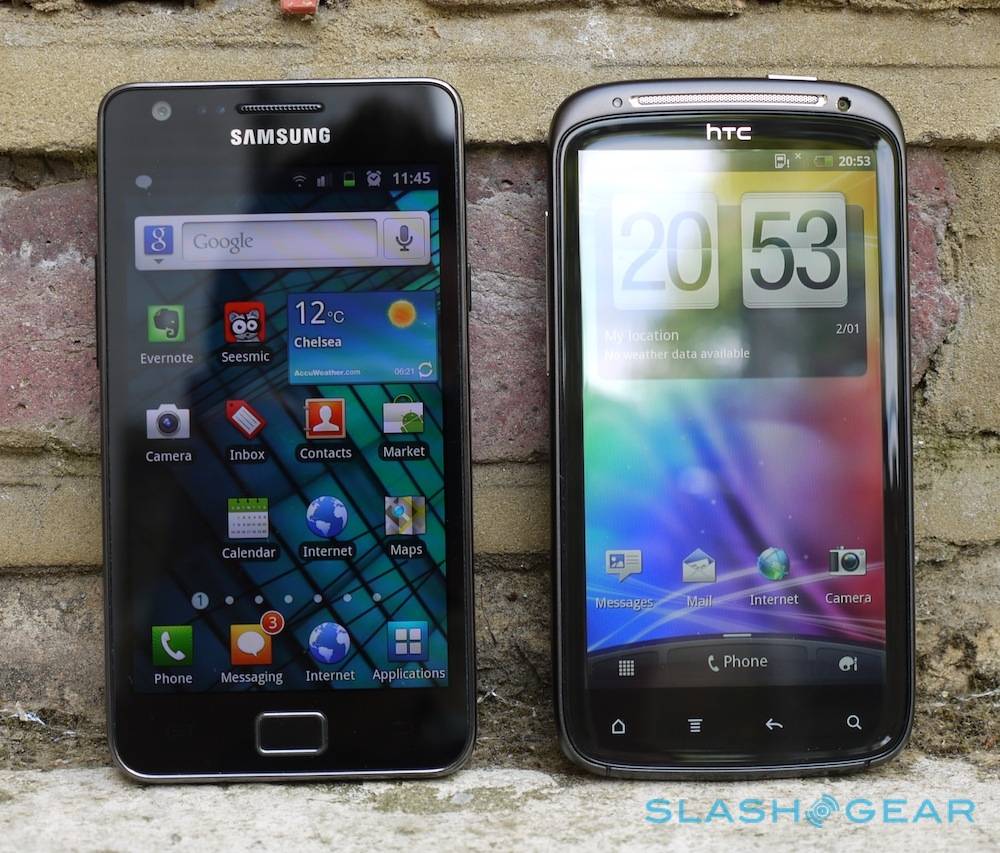 Behold the ultimate right now battle of the century. In this corner the newest and greatest dual-core device from Samsung, the next generation of the best selling series of Android smartphones in history, Samsung Galaxy S II! And in this corner, newly formed 4.3-inch round-sided king of the HTC world, blasting forth with another dual-core processor for a battle that’ll be remeniced about for centuries to come, the HTC Sensation! This war is a long time coming – or a long time coming if you consider technology time which is basically 100x faster than normal time. Let the fight begin!

Samsung offers the thinner of the two devices while HTC’s feel is what Chris Davies considers “better in the hand.” It’s curved on the front and curved on the back for a fully comfortable feel – high-quality metal and soft-touch plastic make for a device that appears to be much more expensive feeling than its Samsung opponent. The HTC here is thicker with 11.3mm versus 8.49mm and just under a millimeter longer, but it’s narrower than the S II by a bit. Rounded corners on the Sensation also add to the feeling that this is a smaller phone. 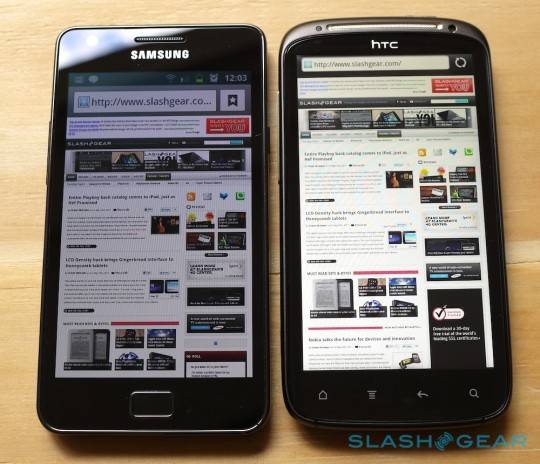 Display technology is a deal both HTC and Samsung say they’ve got the upper hand on, and what you’ve got here is a battle between quality and resolution. HTC has a qHD 960 x 540 resolution LCD panel on the Sensation, while the Galaxy S II has a lower-resolution, WVGA 800 x 480 screen – it’s Samsung’s own Super AMOLED Plus panel though, so you’ve got to take that into account. You’ll notice the extra pixels on the HTC when you’re up in the browser and looking at text lists – this means more on the screen and more readable text without a zoom on the higher-res Sensation.


Note: Davies accidentally say the Sensation has 1GB of RAM in the video, whereas it actually has 768MB

Brighter whites appear to be emanating from the HTC device but the contrast and colors don’t POP like they do on the Samsung Super AMOLED Plus featured on the Galaxy S II. Blacks are more inky on the S II, colors are more saturated, and as you can see by the shot of the benchmarks below, richness can be seen quite clearly on the left. Something to consider here on the other hand is that the Sensation looks fantastic on its own, streaming video looking more than acceptable in most situations. Outdoor viewing goes to Samsung though by a mile. 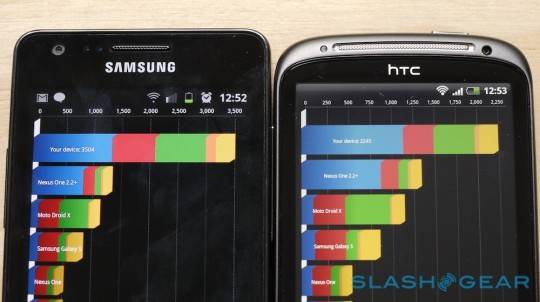 As for performance, Samsung’s Galaxy S II is still the clear winner. Benchmarking in Quadrant Advanced showed the Samsung score 3504 overall, with 7119 in the CPU category. In contrast, the HTC managed 2245 overall, with 5918 in the CPU category. It’s important to note here that of course benchmarks aren’t everything and that, if you view the video above, Quadrant cannot identify the CPUs because they’re so new. 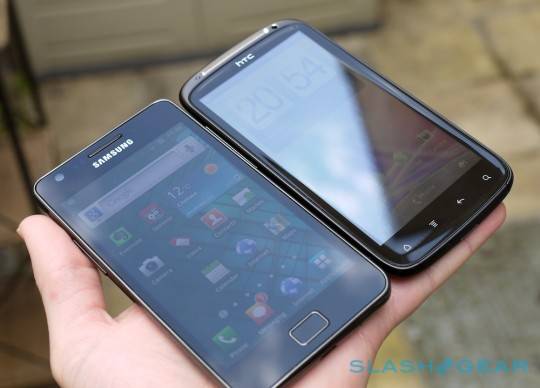 What do you think? Battery life going to let you decide which one you want? In that case you’d better wait on our full review of the Sensation as HTC hasn’t been the most impressive in such a category as of late. Will you let processor speed win you over? Better get on board with Samsung. How about feel? Samsung seems to have a bit of an edge in industrial design here if we’re talking about corners that wont poke your eye out.

Behold the battle! It rages on into the future!

BONUS of course you’ll also want to check out Chris Davies’ unboxing and hands-on video as well as our write-up of his first look!