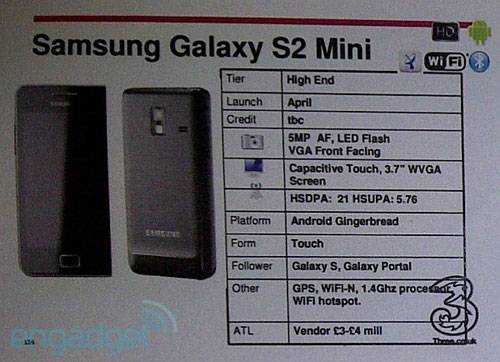 The geeks over at Engadget have landed a leaked roadmap for Three that shows the Samsung Galaxy S2 Mini smartphone. The leaked flyer shows that the phone will launch in April and will have a 5MP rear camera with LED flash and a VGA front camera for video conferencing. The phone will use a 3.7-inch screen with WVGA resolution.

It will operate on HSDPA and HSUPA networks and run Android Gingerbread as the OS. Other features include WiFi, GPS, a 1.4GHz processor and hotspot capability. Along with that new phone, the launch dates of other notable devices turned up as well.

The Nokia X7 is set for a June launch. The HTC Flyer tablet is listed for launch in June with a WiFi only version of the Blackberry PlayBook set for June as well. Whether or not these are these same dates for launch in the US and other places is unknown at this point.